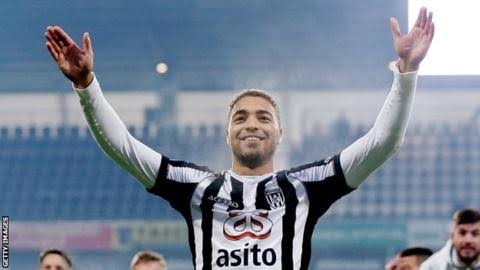 The KRC Genk striker has never hidden his desire to play for the Super Eagles, and he is now only a few days away from seeing one of his biggest dreams come true

According to top Belgian Publications Het Belang van Limburg, former Heracles star Cyriel Dessers has received a letter of invitation from Super Eagles chief coach Gernot Rohr to be a part of the Nigerian national team that is scheduled to feature in two international friendly matches next month.

Dessers, last season’s top scorer in the Eredivisie, was called up for the first time by Nigeria six months ago for the double-headed AFCON qualifying games against Sierra Leone.

But those matches could not hold due to the outbreak of the coronavirus pandemic, cancelling the 25-year-old’s chance of a Super Eagles debut.

The former NAC Breda star has now been presented with another chance as Nigeria continue to seek for more attacking options to complement the efforts of Napoli’s Victor Osimhen, Leicester City’s Kelechi Iheanacho, and Crotone’s Simy Nwankwo.

Born in Leuven to a Belgian father and a Nigerian mother, Dessers had his breakthrough campaign last term, netting 15 goals in 26 games for Heracles to finish as the most prolific striker in the Dutch top-flight.

The former Lokeren forward has since moved back to his country of birth, where he has found the back of the net twice in five league appearances for Genk.

The Super Eagles trade tackles with Ivory Coast on the 9th of October before squaring up against Tunisia four days later, both in Austria.

CHECK IT OUT:  BREAKING! Empire Star Jussie Smollett In Serious Trouble With The Chicago Police