Dino Melaye reacts after socialite Roman Goddess visited him at the hotel and called him ‘uncle’ - NaijaCover.Com
Skip to content 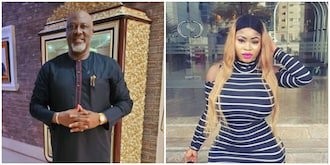 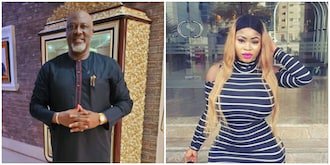 Senator Dino Melaye was recently in the news after controversial Lagos socialite, Roman Goddess, paid a visit to the politician in a hotel room.

Goddess shared a video of herself in the room as she recorded the politician as well. In her caption, she wrote:

“I came to see my uncle. Daddy Dino.”
Popular blogsite, Instablog, shared the post on their page and had many people reacting with mixed feelings.

Melaye, however, was not having it and wasted no time in expressing his displeasure.

He called her out for calling him uncle and told both Goddess and Instablog that they would begin to pay for using his name for lies and propaganda.

“Roman or Greek goddess + instablognja make una begin pay for using my name for lies and propaganda. You! Anti I’m not your uncle oooo…from where to where now. Even in the beer parlour there is ‘seniority’. Kia picanto no fit pull macopolo. Burger no be monkey food. SDM.”

The post Dino Melaye reacts after socialite Roman Goddess visited him at the hotel and called him ‘uncle’ appeared first on .

CHECK IT OUT:  [A Must See] 5 Reasons Your Small Business Isn’t Making Enough Money