The website of the Nigeria Police Force is still offline, a week after a group of Internet activists compromised its security in solidarity with the #EndSARS protest.

Asides being a major channel for dissemination of press releases and updates on its activities, the website is the data warehouse of the force, containing bank details, bio-data information and other sensitive data of Police operatives across the country. This newspaper had previously reported how the group codenamed ‘Anonymous’ shut down the police website and released sensitive data of some police officers under the notorious Special Anti Robbery Squad (SARS) on October 14.

The police unit, although dissolved in the heat of the protest and replaced with Special Weapons and Tactics (SWAT) squad, is notorious for the use of excessive force, harassment and extra-judicial killings.

According to a statement from a member-account, the hacktivist group announced its decision to attack federal government agencies’ websites in solidarity with the protesters campaigning for a total overhaul of the Nigerian police and an end to police brutality.

Ever since the group hacked into the Police database, it has launched similar cyber attacks on the official websites of the Central Bank of Nigeria, the Economic and Financial Crimes Commission (EFCC), Independent National Electoral Commission (INEC) and other government-owned websites.

CHECK IT OUT:  PLEASE HELP! How Do I Report A Corrupt JAMB Registration Centre? 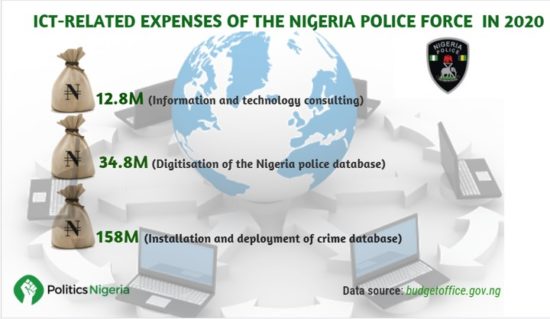 This prompted the security information passed by Galaxy Backbone, an information technology and shared services provider of the Federal Government, advising those in control of MDAs and FG-owned twitter accounts to activate the two-factor authentication feature.

It should be noted that the group has carried out similar coordinated attacks in the United States, Israel, Tunisia, Uganda and some other countries. Its motto is simply “we are anonymous”, referring to its large number of members.

Although there was no specific allocation for the website in the 2020 budget, the ministry budgeted 12,871,168 million naira for information and technology consulting.

Also, a sum of 158 million naira was allocated for the Installation and deployment of crime database while the digitisation of the Nigeria Police personnel record database was allocated 34.8 million Naira.

Meanwhile, in the proposed 2021 budget submitted to the National Assembly two weeks ago, 9.6 million Naira was budgeted for information technology consulting while the sum of 5.63 million Naira was proposed for the development of the force’s website.

Speaking to POLITICS NIGERIA, an I.T expert and computer engineer, Olalekan Ajisafe, cited multiple reasons why a website on a hosting network can be suspended which includes hackers accessing the hosting panel.

“Intellectual property theft is where the owner of the suspended website copied or cloned contents from another website. This action can cause suspension of a website from the web if reported.”

“Also, building web pages has been made easier with the use of pre-designed templates, however, these templates don’t come free they’re been paid for. Failure to renew payment or stealing of template from someone who paid for it can lead to account suspension from the web,” Mr Ajisafe said.

Recovering from the hack takes a remarkable amount of time as the original website owner needs to make a case and provide substantial evidence before the hosting platform can start taking actions to recover it, the I.T expert explained.

The Police Public Relations Officer of the force, Frank Mba, has refused to respond to enquiries on the website sent by our reporter. He neither responded to multiple telephone calls put across or text messages sent.

While the website remains inaccessible, Many Nigerians have made a mockery of the Nigerian police, particularly on social media.

“The Nigerian Police Force will be harassing the tech boys that should have helped them secure their website. See how they are hacking everything. Una go get sense by force,” Toyosi Godwin, a twitter user posted.

Another user, Osita_chidoka, questioned the effectiveness of the police if it cannot successfully protect its website.

CHECK IT OUT:  Naval Officer Found Dead In His Apartment In Kaduna (Photo)

” Can a Police that can’t protect its data protect our country? I expect resignations for this serious breach. Police is dire need of modernisation. A new generation is required,” he wrote.

@TayeOO7, another twitter user posted: “Over 3 days Nigerian police website has been hacked, a police force that are arresting yahoo boys and fighting cyber crime, they can’t collect their website from hackers after 3 days of being hacked.”