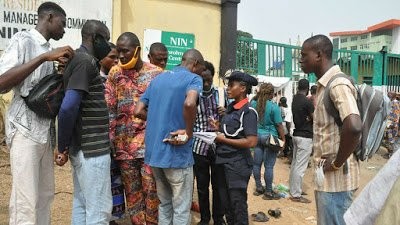 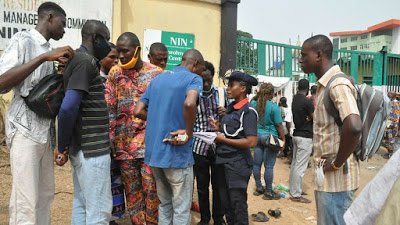 Nigerians, in the bid to avert an impending disconnection of their SIMs, have besieged the office of the National Identity Management Commission (NIMC) in Lagos to enroll for their NIN,despite the announcement of extension by six weeks for the registration of National Identification Number (NIN)

The Federal Government, through the Ministry of Communications and Digital Economy, had initially issued a two-week ultimatum to all telecommunications operators in the country to block all Subscriber Identification Modules (SIMs) without NIN by today (Thursday). It later extended registration for NIN by up to six weeks, from December 31 to February 9, 2021.

At Ikeja yesterday, it was a distraught crowd that stormed the NIMC to enroll for their NIN. By 8:00a.m. the gate leading to the office in Alausa was already shut against Lagosians, who besieged the place despite existing ban on large gatherings due to the second wave of COVID-19.

The situation was also the same on Tuesday, the first working day after Christmas. Hundreds of NIN applicants were locked out of the premises, with only a select few admitted into the compound, which also houses the Lagos head office of the Nigeria Security and Civil Defence Corps (NSCDC).

Many of those who gathered outside were seen discussing their frustration with the registration in groups, flouting the COVID-19 protocols put in place to check the spread of the pandemic. Physical distancing was not adhered to. It was also observed that the majority of them did not use their face masks and those who did, had the masks over their chin.

CHECK IT OUT:  Confusion In Boko Haram Camp As Chief Judge Is Killed In Air Strike

A lot of the enrollees who spoke with The Guardian appealed to the government to create more registration centres to ease the process and consider a further extension of the deadline to stop rush and alleged exploitation of the process for financial gain by NIMC officials.

They alleged that citizens were being asked to pay N5,000 for the registrations at other NIMC centres in Lagos, reason why many people are trooping to the Alausa office to evade extortion.

One of those who spoke on the condition of anonymity said: “In Ajeromi Ifelodun LGA, the officials there are demanding N5,000 bribe before enrolling anybody. Likewise, in Yaba LCDA, they are collecting N1,000 for the form and N5,000 for enrollment and data capturing. A lot of people have been at their offices since midnight to register.

“Those who came around 6:00a.m. were surprised to meet a crowd already. To make the process easier, many of us have downloaded the form online and filled it, just to submit it is the issue. Why is the government not doing anything about these extortions when the exercise is supposed to be free?”

Another, Paul Odijie, said: “The authorities should know that some NIMC centres are charging Nigerians to register for NIN. My father was asked to pay more than N5,000 to register today in Lagos and he did unfortunately. Where are all those other outlets the government claimed will be registering on behalf of NIMC to reduce the pressure on citizens and why have they not started?”

Meanwhile, the NIMC on Tuesday released new guidelines for the NIN enrollment. This was disclosed in a statement signed by the commission’s spokesperson, Kayode Adegoke.

CHECK IT OUT:  Senator Dino Melaye Showers His Son With Prayers On His Birthday (Photo)

The statement said the commission had adopted a couple of measures to contain the spread of the virus while ensuring its services to Nigerians are not entirely interrupted. According to the statement, the guidelines take effect from December 30, 2020.

It said attending to applicants would be based on booking system. For bookings, applicants are to visit any of the NIMC offices closest to them during stipulated business hours (9am – 1pm).

“Mindful of the second wave of the COVID-19, which continues to