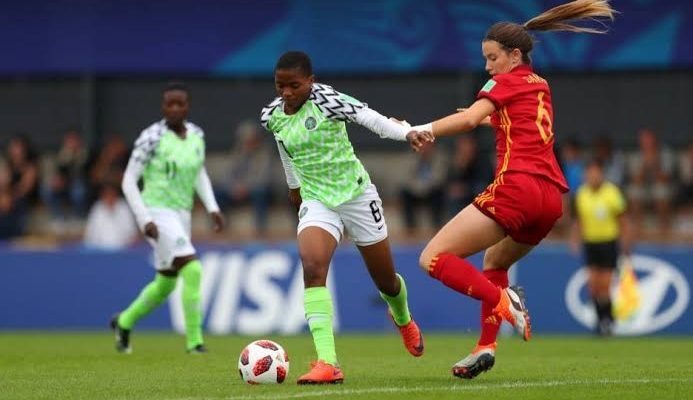 Ajibade, a member of Nigeria’s 2018 African Women Cup of Nations winning team, put pen to paper on a two-year deal.

The 21-year-old forward moved from Nigerian side Robo Queens to Norway in December 2018 after an excellent showing at Ghana ’18 and scored 13 goals in 40 league games for Avaldsnes Idrettssenter.

But with her contract with the Norwegian top division side running out in December 2020, Ajibade has secured her second move in Europe with her switch to the Spanish giants.

With Barcelona unleashing free-scoring Super Falcons’ Asisat Oshoala on the rest of the Spanish league, Atletico Madrid have now moved to counter their bitter rivals with their own Nigerian import.

An excited Ajibade has promised to give her all to push Las Rojiblancas back to the top of Spanish football.

“It is a great privilege and an opportunity to be here,” Ajibade told the club website.

“I am excited to be a part of this team, and I hope that together we achieve success. It is a great step in my career and a great challenge for me, and I am ready to give it my all.

“I am a versatile, versatile, energetic, and hard-working player. I tell the Atléticos that I’m going to do my best so that they and the team can feel proud.”

It is a great privilege & joy for me to be joining Atletico Madrid Feminino.
It is an opportunity I will never take for granted, and I am ready to give my all to push this great club to even greater heights. pic.twitter.com/1Ep7IS1WQ1

Ajibade, with her move, becomes the second Nigerian star to feature for the Spanish giants following Francisca Ordega’s loan spell in 2017.

CHECK IT OUT:  End Of The Road! Man Sentenced To Death For Killing Girlfriend (Photo)