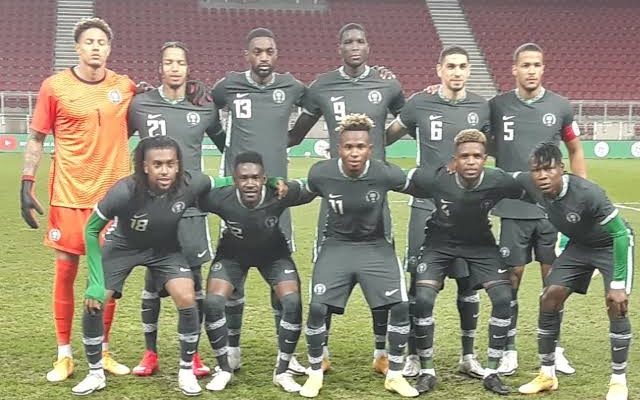 Next year’s Africa Cup of Nations holds between January and February after it was initially postponed this year due to the coronavirus pandemic.

However, it could also have been played this month as the last edition in Egypt in 2019 was played in the summer period.

Nigeria’s Super Eagles are one of the 24 national teams that have qualified for the event to be hosted in Cameroon, and the 2013 champions would have been one of the big favourites to lift the title if it had been held this month.

Soccernet.ng’s Imhons Erons draws up a list of 23 players who could have hypothetically powered the West African nation to her fourth continental crown.

Maduka Okoye has made the Super Eagles’ number one gloves his property, and not even his rivals can begrudge him after his excellent performances in the Netherlands for Sparta Rotterdam.

But he needs trusted deputies, which can be ably provided by Heartland’s Ikechukwu Ezenwa and Apoel’s Francis Uzoho, at the expense of the new boy, Enyimba’s John Noble.

There are not many Nigerian central defenders in Europe, leaving the gate open for Chidozie Awaziem, William Ekong, and Kenneth Omeruo to walk in free and pick their spots in the squad.

Leon Balogun remains the perfect partner for Ekong at the heart of the defence, especially with his brilliant season for Scottish champions Rangers.

But as he is currently injured, West Brom’s Semi Ajayi steps in to pick the shirt and wipe away the tears and disappointment of not making the squad to Egypt 2019.

Things, however, get interesting at full-back.

Abdullahi Shehu practised his trade in Cypriot and was once head coach Gernot Rohr’s ‘Mr. Versatility’. But Fulham’s Ola Aina, Boavista’s Awaziem, and Ajayi can fill in at different positions, too, allowing Tyronne Ebuehi to make the list deservedly.

The Benfica man enjoyed a stunning year with FC Twente in the Eredivisie this recently-concluded season.

And while Jamilu Collins was hustling away, hidden from public glare in the German second tier with Paderborn, Zaidu Sanusi was shining bright for Porto at the biggest stage of all – the UEFA Champions League.

So, the former Santa Clara star comes in as a direct replacement for Collins.

Rohr is yet to find a replacement for the retired smooth midfield operator John Mikel Obi.

And Ovie Ejaria and Michael Olise have still not been cleared to represent the country of their fathers. Kelechi Nwakali’s time will come in the nearest future.

In the absence of other notable options, Oghenekaro Etebo suits up beside Leicester City’s enforcer-general, Wilfred Ndidi, who crowned another fantastic year in England by lifting the prestigious FA Cup.

Midtjylland’s Frank Onyeka and Rangers’ Joe Aribo have never been to the Afcon, and it is not a bad time to write their names in the championship’s record books.

Kelechi Iheanacho agonisingly missed the last edition of the Afcon, but he would have been the first name this time.

The former Man City man turned his career around with a string of excellent goalscoring performances that helped him emerge out of the shadows of Englishman Jamie Vardy at Leicester City.

CHECK IT OUT:  Davido To Sue Lady Who Claims He Impregnated Her

Victor Osimhen is still, however, Rohr’s first-choice number nine, after banging in five goals during the qualifiers and notching ten goals in his maiden campaign in Serie A. He should be saddled with the responsibility of leading the line against Africa’s best defenders in Cameroon.

The art of goalscoring, though, was perfected in Belgium by Paul Onuachu and in Italy by Simy Nwankwo. But blessed with similar physique and characteristics, only one of the two can make the team, and the Genk man gets the nod.

Ahmed Musa was club-less for a lengthy period, is getting slower, and can not withstand the Sadiq Umar momentum over the last few months.

But the Super Eagles skipper has the advantage of experience and is Nigeria’s go-to-guy for the big occasions (remember Musa’s crucial goals at the 2014 and 2018 FIFA World Cups.)

Bordeaux’s Samuel Kalu is one of Rohr’s favourite boys, but injury has hampered his season, severely ruling him out of making this list.

Slavia Prague’s Peter Olayinka is the apparent replacement following his exploits in the Czech top-flight and the Europa League. But Terem Moffi is also in the picture after emerging as one of the best strikers in France.

But versatile Olayinka is a force of nature on the wings with a good eye for goal, and his experience in Europe’s biggest club competitions could come in handy for the Super Eagles in the latter stages of the Afcon.

CHECK IT OUT:  Kiddwaya’s mother reveals why her sons still live with their father

Everton’s Alex Iwobi had a season to forget at Everton. Still, the former Arsenal lad remains a favourite among Nigerian fans, who are convinced he gives his all when wearing the green-and-white.

This enormously talented squad can drive fear into any opponent at the Afcon and, with a bit of luck, power Nigeria to a fourth continental title.