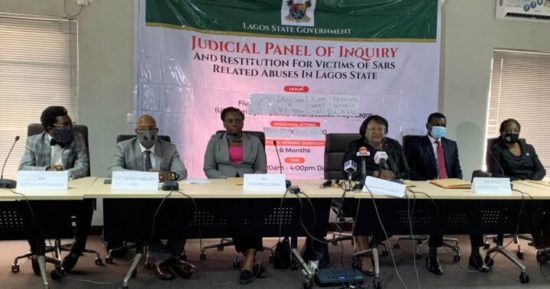 The Lagos State Judicial Panel on Restitution for Victims of SARS Related Abuses and Other Matters has awarded the sum of N36.2million to police officers attacked during the Lagos leg of the nationwide #EndSARS protests.

According to the panel’s final report, 11 petitions were heard during the sittings, eight of which were deemed worthy of compensations.

Although the panel considered the hearing of 11 cases, 65 petitions were originally submitted by aggrieved officers.

“Subsequent to the review by the panel, the petitioners which were set aside for hearing, make up the ‘Considered List (CL),’” the report read in part.

Elizabeth Obi-Enadwuze, an Assistant Superintendent of Police attached to the Airport Command, and ASP Iliyasu Muhammed of the Ikeja Police Headquarters were awarded N10 million each.

Oke Nathaniel Obi-Enadwuze, ASP Enadwuze’s son, was stabbed in the neck on October 21, 2021, by unknown hoodlums claiming to be #EndSARS protesters, according to the report.

On November 15, the panel submitted a 309-page report to Babajide Sanwo-Olu, the Governor of Lagos State, revealing names of #EndSARS protesters murdered by invading Nigerian soldiers at the Lekki Tollgate.

But some pro-government individuals have punctured the leaked version of the report, saying it did not contain compensations for police officers and army personnel injured or killed during the protest.

However, FIJ can exclusively report that the panel entertained petitions from agrieved police officers seeking justice.

CHECK IT OUT:  Osinbajo Reacts To Rumours On Buhari’s Purported Order

Although N400 million given by the state government has been exhausted on the compensation of other victims, the panel recommended and appealed to the government to pay affected officers their awarded sums.