See Notorious Armed Robbers Who Will Die By Hanging In Ilorin (Photo) - NaijaCover.Com
Skip to content 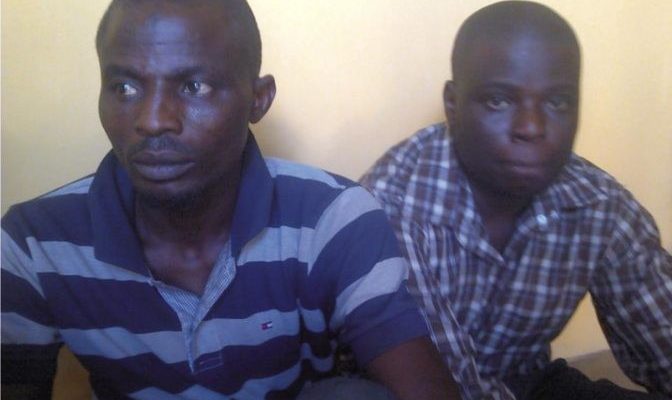 A court has pronounced death sentence on some notorious armed robbers after they were found guilty in Ilorin.

An Ilorin High Court presided over by Justice Adenike Akinpelu has sentenced a notorious armed robber, Olatunji Ibrahim Ariyo, and his cohorts to death by hanging.

Ariyo, who is popular in the state capital for his nefarious activities, was sentenced alongside, Ganiyu Sulyman Yaro, Timothy Oyebanji, Lukman Olateju Sanda and Akeem Olayinka (deceased).

According to Justice Adenike Akinpelu, the convicts were tried on a six-count charge for the offences of criminal conspiracy, armed robbery, causing mischief by fire and theft contrary to Section 6 (b) and 1 (2) of the Robbery and Firearms Act, laws of the Federation of Nigeria 2004 and Sections 337 and 286 of the Penal code.

The court held that on April 25, 2015, the convicts committed the said offences at Agbarere area, in Ilorin.

“Each of the convicts was sentenced to imprisonment for a term of 2 years and the sum of N25,000 is imposed as fine on each of them on count 5 for causing mischief by fire

“Each of the convicts was sentenced to death to be executed pursuant to Robbery and Firearms Act on count 1, 2, 3 and 4 for the offences of criminal conspiracy to commit armed robbery and armed robbery respectively.

CHECK IT OUT:  This Is What You Should Be Expecting From Buhari The Second Term – IBB Hints Nigerians