Shocking! How An Ex-Air Force Chief Got N6 Billion From NAF Funds For His Own Use - NaijaCover.Com
Skip to content 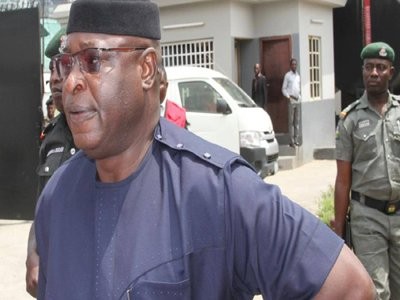 The Economic and Financial Crimes Commission (EFCC) arraigned him along with former Chief of Air Staff Air Marshal Adesola Amosu and a former Director of Finance and Budget, Air Commodore Olugbenga Gbadebo.

EFCC said the three, on or about March 5, 2014 in Lagos, conspired to convert N21,467,634,707.43, property of NAF, which sum they reasonably ought to have known forms part of proceeds of unlawful activities to wit: criminal breach of trust.

An EFCC investigator, Tosin Owobo, led in evidence by the prosecuting counsel Rotimi Oyedepo, told the court that Adigun made a statement at EFCC, which was tendered in court.

He said the second defendant disclosed in his statement that he incorporated Delfina Oil and Gas, Hebron Housing Limited, Mcallam Oil and Gas, Trapezites BDC Limited.

Owobo added: “He said he is the sole signatory to the accounts of the companies.

“He said the names of the directors are all pseudonyms and not names of any member of his family.

“In his statement, he wrote that out of about N16.9billion inflow from the Nigeria Air Force related accounts into his companies, he only benefited about N6billion

“He said the chief of Air Staff and others would account for theirs.

“He also stated that the whole money was not shared, as some jobs were executed.

CHECK IT OUT:  Check Out A Couple That Recently Bagged PhD In Mathematics And Applied Mathematics

“He further wrote in his statement that he would be willing to let go of properties worth the sums of money he benefited.”

When asked to state how he came about Trapezites Bureau de Change Limited and his findings, the witness said upon analysis of Trapezites’ statement of accounts, it was discovered that about N3.6billion was received from various NAF accounts.

The defendants were alleged to have made several transfers amounting to N21billion to different companies charged with them.

The defendants pleaded not guilty to the alleged offence which EFCC said contravened Section 18(a) of the Money Laundering (Prohibition) Act, 2011 (as amended) and punishable under Section 15(3).

Justice Chukwujekwu Aneke adjourned until April 15 and 16 for continuation of trial.

The post Shocking! How An Ex-Air Force Chief Got N6 Billion From NAF Funds For His Own Use appeared first on Naijaloaded | Nigeria’s Most Visited Music & Entertainment Website.