Yahoo-Boy Who Pretended To Be A Divorced Mother Of One Arrested By EFCC (Photo) - NaijaCover.Com
Skip to content 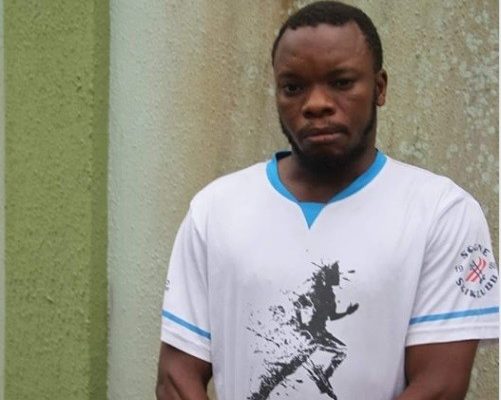 The Economic and Financial Crimes Commission, EFCC, Lagos Zonal office, on Thursday, March 7, 2019, arraigned one Godwin Ikechukwu Kwentoh before Justice Oluwatoyin Taiwo of the Special Offence Court sitting in Ikeja, Lagos on a two-count charge bordering on possession of document containing false pretence, an offence contrary to Section 6, 8, (b) and 1(3) of the Advance Fee Fraud and Other Fraud Related Offences Act No. 14 of 2006.

One of the counts reads:

“That you, Godwin Ikechukwu Kwentoh (a.k.a Edward Herman, Philip Jones and Robert Mueller 111), on or about 18th December, 2018 in Lagos within the ikeja Judicial Division, had in your possession a document dated Monday, October 19th, 2015 wherein you falsely represented yourself to a lady, Ira Rajali, as Edward Herman, single for the past four years ; has a daughter and got divorced after 15 years of marriage due to infidelity, disrespect and immorality when you knew or ought to know, having regard to the circumstances of the case, that the document contains false pretence.”

The defendant pleaded not guilty to the charge when it was read to him. In view of his plea, the prosecution counsel, Frank ifeoma, asked the court for a trial date and also prayed the court to remand the defendant in prison custody.

Counsel to the defendant, however, prayed the court to remand him in the EFCC custody. Justice Taiwo ordered the defendant to be remanded in Ikoyi prison custody and adjourned the case to March 19, 2019 for commencement of trial.

The post Yahoo-Boy Who Pretended To Be A Divorced Mother Of One Arrested By EFCC (Photo) appeared first on Naijaloaded | Nigeria’s Most Visited Music & Entertainment Website.

CHECK IT OUT:  Sense Or Nonsense?? Lady Strips Naked To Protest Against Ritual Killings In Lagos (Watch Video)