Man Arrested After Stealing Phone Worth N270K Inside A Church In Lagos - NaijaCover.Com
Skip to content 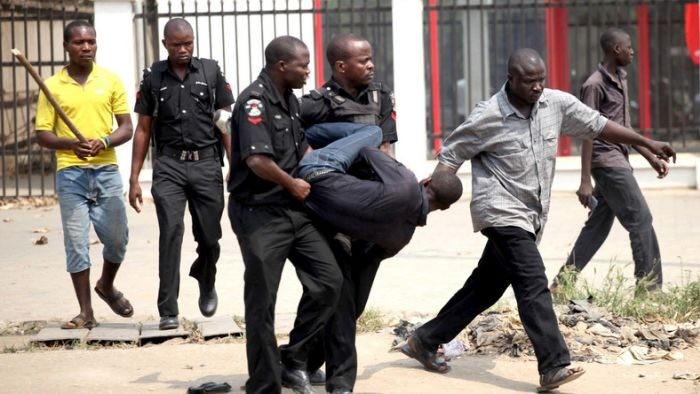 A 29-year old man caught inside a Catholic Church in Lagos for allegedly stealing worshippers phones, has confessed that he never went to the churches for prayers but to steal from the congregation at the Christ the King Catholic Church Ilasamaja, Lagos.

It was gathered that the suspect, Ridman Lateef, dressed up and pretended to be part of the congregation for the celebration of Mass.

However, during the consecration when others were deeply in prayer, he reportedly carted away phones belonging to those beside him. He had particularly targeted a Samsung Galaxy phone worth N270,000, picked it and tried to escape.

While he was attempting to escape from the Church, an eagle eyed church security official apprehended him, recovered the phones and handed him over to the police for interrogation.

P.M.Express scooped that during interrogation, Lateef told the Police that he was not a member of the Church and had not gone to there for prayers. He also revealed that he and some members of his gang went to churches to steal but it was unfortunate that he was caught and he did not know if the other gang members who went to the church succeeded.

After interrogation, the police found him culpable and charged him before the Ogba Magistrates Court for conspiracy and stealing. He pleaded not guilty.

The prosecutor, Inspector E. Koti, informed the Court that the defendant was not only the person that went to the Church to steal; he said that others were still at large and the police were trailing them.

CHECK IT OUT:  Man United To Slash Players Salary After Missing Out On Champions League

The Presiding Magistrate, Mrs. M.O. Tanimola, granted Lateef bail in the sum of N100,000 with one surety in like sum.

However, he will remain in prison pending when he will perfect his bail condition. The matter was adjourned till 8th April, 2019.

The post Man Arrested After Stealing Phone Worth N270K Inside A Church In Lagos appeared first on Naijaloaded | Nigeria’s Most Visited Music & Entertainment Website.