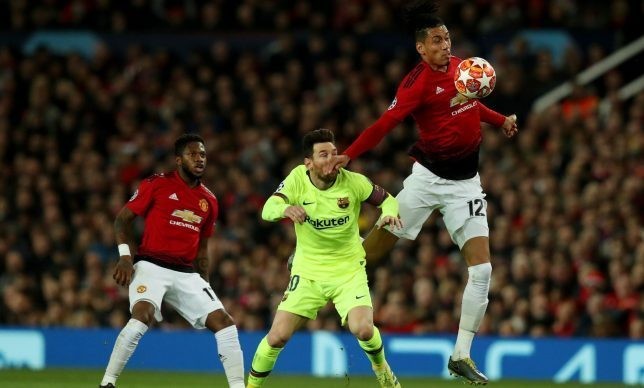 Chris Smalling has insisted there was no animosity between him and Lionel Messi after he caught the forward with a flailing arm during Manchester United’s 1-0 defeat to Barcelona.

The collision left Messi with a bloodied nose and Barca’s talisman required treatment before he could continue in Wednesday’s Champions League quarter-final first leg.

While Messi’s injuries at first appeared serious and noticeably affected his energy levels at Old Trafford, scans showed that there was no significant damage to the attacker’s face and nose.

Smalling has since lifted the lid on a conversation he had with Messi after the final whistle, claiming the Argentinian ‘knew’ the coming together was an ‘accident’.

‘Yeah we spoke after. I didn’t realise at the time actually that I had caught him like that,’ Smalling told BBC Radio 5 live.

‘But after the game we had a brief chat, shook hands and he said he knew it was an accident.

‘[Luis] Suarez after as well, we had a good tussle and he just shook my hand after and said good luck and we just said good luck.

‘So it’s nice when you can have that battle on the pitch and then obviously there’s full respect after the game because ultimately you’re just trying to do your best and enjoy the game.’