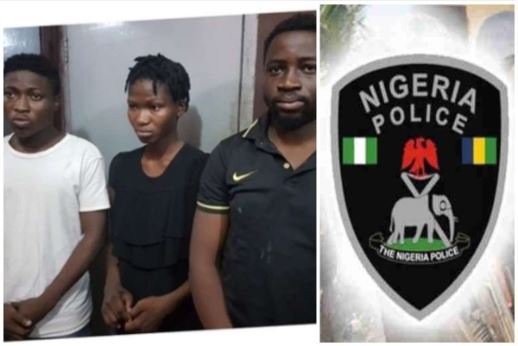 Oluwafemi Lawrence Oyedokun was arrested alongside two others (his girlfriend, Rebecca Oyebode, and his friend, Oyewunmi Abiodun Ridwan) for impersonating King Sunny Ade to defraud many.

The suspects were said to have opened a fake Instagram and Twitter accounts with the handle @kingsunnyademusic to advertise a fake U.S and U.K musical tour.

NewsmakersNG reported that Yinka Quadri’s aide absolved the actor of any complicity in the crime, as it was further gathered that he raked in millions by impersonating King Sunny Ade.

Reacting to the arrest, the veteran singer said;

“People were always calling my number that they heard I was organising a tour. When it was getting too much for me, I had to call the police who helped me. People were thinking I was the one doing it, and I’ve never done anything like that in my life. I’m a law-abiding citizen of this country. I came to the CP and he promised to investigate.”

Oyedokun who dropped out of Osun State College of Education, Ilesha, in his second year as an English and political science student and once ran a blog named Hip-hop Gist, said he started impersonating KSA in March 2018, allegedly opened several bank accounts and detectives have so far traced a total of N3,111,175 obtained from 61 victims. They also uncovered cash inflows ranging from 22 to 33 victims in a day, even as the suspects are in detention.

CHECK IT OUT:  “I Kidnapped My Step-sister To Raise Money For My Girlfriend” – 22-year-old Man