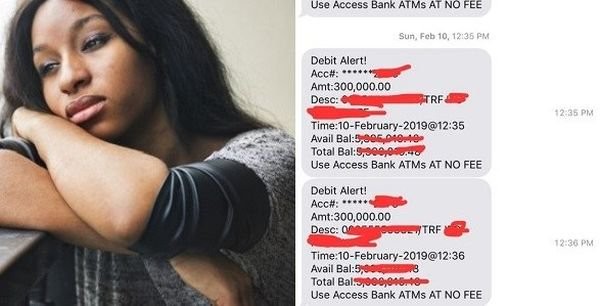 A Nigerian lady has taken to her social media page to narrate how a family member of hers, scammed her of N600,000.

In her narration, she explained that the relative called her to inform her of a plot of land available for sale, which she agreed to buy and then sent her the money.

After the family member received the money, it was one story to the other – and now other members of the family want the matter settled amicably.

I’ve just been scammed of 600k by a distant family member. Now all my uncles, mom and Dad are begging me on top my money?

She called me ending of January and told me that her co wife wants to “urgently” sell her 3plots of land in the village at a very cheap price, i asked her how Legit the stuff was and she told me VERY LEGIT. Said the woman’s son is critically ill and needs urgent money for treatment.

I said Ok i will send someone to check the land out. Which i did and everything checked out. 10th February, i paid the money to her and that was how story entered the matter. She then told me the woman already sold to someone else cos I wasn’t serious.

I said OK oya pay the money back naa she said I should wait that she have SEEN another land. I agreed o cos I wanted to buy another land, fence it and forget it for like 5-10years. Anyway, everyday she kept coming up with different excuses that the one

She saw, they are having family issues, another she saw the husband agreed but the wife said no. Another one she saw it’s deep in the forest. Only for me to get a call from my mom today telling me how She used some of the money to pay her kids’ waec/Jamb,medical

Bills then the rest she used it to pay off debtors, feed and start something for herself. I then asked my mom why didn’t she send the money back then ask for help? What nonsense? Hung up on my mom, called the woman back and told her if she doesn’t send the money by Month end

Both her, her husband and the kid writing WAEC will be arrested and transferred to a state Only i will know of. Next thing my parents and uncles are calling my phone and asking me to come back so we can settle it as a family? I told them if I’m traveling back it will be To get her and her family arrested. Now everyone is saying I’m OVERREACTING?

My anger is still boiling and I probably might do worse if I don’t see my money by month end. The most annoying part is that she HUNG UP on me when i was telling her i will get her arrested?

CHECK IT OUT:  Millions Of Students Out Of School As Coronavirus Cases Increase