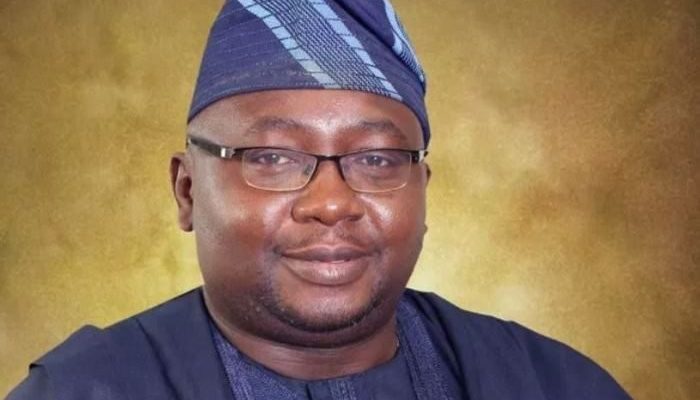 Five weeks after he lost to the Peoples Democratic Party (PDP) candidate, Mr. Seyi Makinde, the governorship candidate of the ruling All Progressives Congress (APC), in Oyo State, during the last election, Mr. Adebayo Adelabu, has described his defeat as a blessing in disguise.

The APC candidate, while breaking his silence, apologized to the people of the state for keeping quiet for more than 30 days.

Adelabu in an emotional-laden statement he personally signed, a copy which was made available to us on Wednesday, explained how he struggled to understand the defeat he and his party suffered in the election.

He said that his defeat will make him come out a better and stronger person.

The former Deputy Governor (Operations), Central Bank of Nigeria (CBN), said that despite his defeat, he remained the single strongest candidate in the 2019 gubernatorial election.

Good day to you my people. 2019 elections have come and gone. I want to thank you profusely for the uncommon support, morally, financially and spiritually that you showed me during the last Gubernatorial election.

I’m eternally grateful and indebted to you and I believe it’s only the Almighty Allah that can pay you back and in folds too. Once again, God himself knows the sincerity of our intentions and genuineness of our purpose, so our sacrifices are not in vain, but remain an innocent investment in the desired prosperity of our dear state. Whatever happens to a man is either a blessing or a lesson.

However, in this case, it’s both a blessing “in disguise” and a lesson to come out with a better and stronger person. Electoral losses, as read in history, have made great leaders come out stronger, better and more successful and never to depress or discourage them.

CHECK IT OUT:  TOO BAD! Fire Kills Pregnant Lady And Her 3 Children In Yobe

I take solace in the persistence and tenacity of our 357,000 strong genuine voters (which is larger than what ushered in the last three successive governors) and kindness of history and posterity.

The devil is in the details like they say, as a first-timer, with 357,000 genuine votes, we remained the single strongest candidate in the 2019 Guber elections claimed to be displaced by the conspiracy or coalition of five other Guber candidates. This also gave out our party as the single strongest and most popular party in the last elections. All these should not go unnoticed and should prepare us better for challenges ahead.

My apology for the delay in reaching out, being close to 40days now after the elections. Like every one of our supporters, I personally had to struggle for some time to come to terms with the realities of the disappointing results of the election and just returned from a two weeks vacation abroad, where I took some time to rest, spent time with my family and reflected on the way forward.

Notwithstanding the shocking and unfavorable outcome of the elections, I still thank the Almighty Allah for seeing us through a well-orchestrated electioneering campaign devoid of casualties, which I believe will go down in history as one of the most flamboyant, issue-based and all-inclusive campaign ever in the history of Oyo state politics.

A lot of hitherto politically apathetic and indifferent personalities, showed a lot of active interests and unprecedented supports toward our aspirations to serve our motherland and see to the progress of our dear state, simply for the singular reason of my involvement.

CHECK IT OUT:  We Are Ready For Festive Season – LAWMA Assures

Through this, our conscience is clear and our emotions fulfilled for having participated and showed interest in the determination of who runs the affairs of our state.

Posterity and history, I believe will be kind to us as having chosen not to ignore the process of choosing those who paddle the canoe of our state to progress. Like they say, the joy of the Olympics is not just in winning medals but in the fulfillment of our participation.

And I also know that Politics they say is not a 100mtr dash but a marathon which we know always starts with a single step. That heavy and decisive step has been taken through the process of this last election and we wont stop until we reach our desired destination.

While I believe the results came out the way it was destined, the adduced reasons notwithstanding, our party is collectively convinced that the election was marred by various electoral irregularities and malpractices ranging from front-loading of votes to multiple voting cutting across same and multiple polling units, hence the petition submitted at the Tribunal presently being prosecuted and this is left for the Judges to determine.

Notwithstanding the outcome of the Election petition tribunal, I’m personally of the opinion that we need not be stagnant in our electoral quest and planning for the next election should start in earnest. Our political structures across the state remain intact while our supporters remain undaunted.

We intend to keep and maintain these structures and regularly reach out to our fans and supporters who till date are still left gapping wondering why the results came out the way it did.

The reflections are all over the state as everywhere seems to be in a state of mourning and no signs of celebrations or jubilations ushering in a popularly elected new government.

We will be embarking on a “Thank you” visits to all our party members, stakeholders, supporters and fans across the length and breadth of our state to intimate them of our plan going forward.

We are still thankful to God that our party still occupies the Federal Govt and the National Exco of our party has assured us of consistent and special support to enable us to bounce back being the only state in the South West now in opposition.

I also want to let you know that I will soon reach out to you on specific plans, programs and activities in our camp and plead that you should not relent in your support for this cause and very soon, we will reach our destination.

It is worthy of note that one or two lessons have also been learnt and all these will guide our actions and activities going forward. Thank you and God bless.