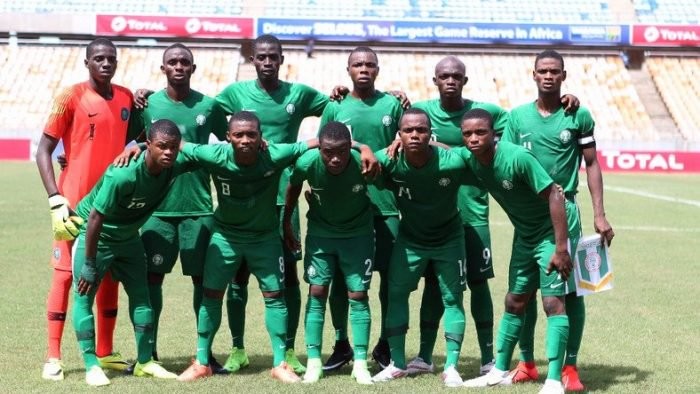 Nigeria’s national under-17 male football team on Wednesday in Dar es Salaam lost 9-10 after penalty kicks to their Guinean counterparts in a pulsating semi-final match at the Africa Under-17 Nations Cup.

In the competition’s first semi-final match played at the Benjamin Mkapa National Stadium, both sides drew goalless after 90 minutes of intense action.

While the Guineans bagged five yellow cards as against one by their Nigerian opponents during the game, they still dominated proceedings with more shots at goal.

They had 24 shots, as against 16 by Nigeria’s Golden Eaglets, with four on taget and one by Nigeria on target.

The Guineans who finished runners-up from the first round’s Group B were in control with more and better passes, and had more time in their opponents final third.

But both sides failed to score any goal for the game to go on to penalty kicks directly.

Both sides scored their first five kicks each for an advance into the sudden death shots.

It continued as a ding-dong affair, with both sides scoring, until the Golden Eaglets’ Ogaga Oduko missed the fifth (and 10th) kick.

The News Agency of Nigeria (NAN) reports that the Eaglets will now face the losers of the second semi-final game between Cameroon and Angola in Saturday’s third-place match.

Both Cameroon and Angola, Group B winners and Group A runners-up respectively, met in the other semi-final later on Wednesday.

Guinea will now go on to face the winners of the Cameroon/Angola fixture in the competition’s final match on Sunday.

CHECK IT OUT:  Real Madrid Overtake Manchester United As Europe’s Most Valuable Club