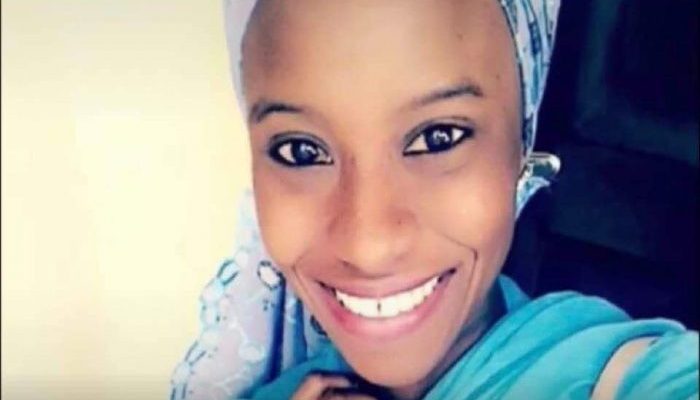 Pictured is Zainab Habibu Aliyu, the Nigerian lady who is presently being detained in Saudi Arabia for drug-related offences.

Zainab was arrested by Saudi Arabia Police on December 26, 2018 shortly after arriving for Lesser Hajj.

She was later arrested over allegations that a luggage, bearing her name tag, contained the unlawful substance after it appeared she was set up.

The National Drug Law Enforcement Agency (NDLEA) uncovered a cartel, which specialised in planting illicit drugs in travellers’ luggage. The commission launched an investigation, which culminated in the arrest and arraignment before a Federal High Court in Kano of seven staff of the airport.

Zainab’s father, Habibu Aliyu who is not happy that his daughter is cooling off in a Saudi Prison despite the recent discovery that she was framed by some drug cartel, explained that the allegations of Zainab entering the Asian country with Tramadol, was absolute falsehood as recent events and arrests have confirmed the girl’s innocence. He has appealed to the Federal Government of Nigeria, the Saudi authorities and the international community as well as well-meaning individuals to intervene in her daughter’s case and help save the ‘innocent’ lady from being executed wrongly.

CHECK IT OUT:  BBNaija 2020: Nengi speaks on Erica, Kiddwaya relationship being ‘fake’