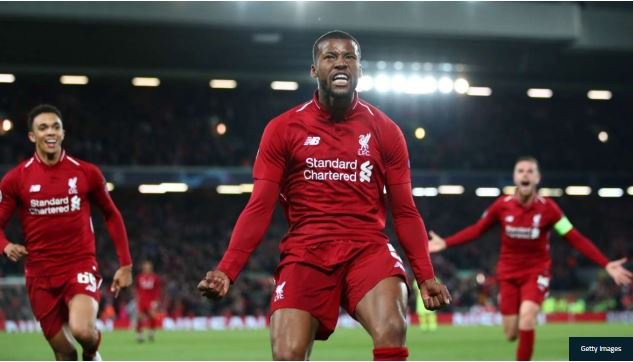 Liverpool midfielder Georginio Wijnaldum believes his side deserve a trophy after they put “everything” into this season.

The Reds narrowly missed out on the Premier League title despite earning 97 points – the highest points tally of any team to finish second in the English top flight – with Manchester City earning just one point more to secure back-to-back titles.

Despite their title disappointment Liverpool can still win a trophy after reaching the Champions League final for the second successive season, where they will take on Tottenham in Madrid on June 1.

Wijnaldum, who scored twice in Liverpool’s dramatic 4-0 semi-final second leg win over Barcelona, believes victory over Spurs would be the perfect way to end the season given their efforts throughout the year.

“If you look back when you’re on vacation on this season, I think everyone will realise we had a really good season, a wonderful season,” Wijnaldum told Liverpool’s website.

“Ninety-seven points, we’d normally be champion with. But in this case, City had one point more and they turned champions. Overall, I think we had a good season and now is the challenge to finish with a title to make the season complete.

“It would be really sad if we finish the season without a title, especially because I think we were quite consistent this season and we did so good.

“I think this season deserves one. We put everything in, everything we could.

“The last couple of games were basically games where we could only win and look at what City were doing. They won also, so fair enough that they are champions.

“But now we have a game that we can control, so we have to bring that to a good end.

“It would be really special, especially because this season deserves an end like that. We’re going to do everything to bring it to that end, but it’s going to be tough.”

CHECK IT OUT:  ‘It’s Hard To Turn Down England’ – Fikayo Tomori Tells Nigerians