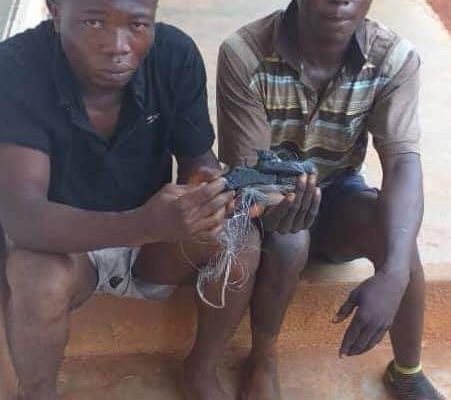 Spokesperson of the Anambra Police Command, Haruna Mohammed, who confirmed the arrest said that on Tuesday, May 14, at about 6:30am, following the flag off of operation Puff Adder in Onitsha by the Commissioner of Police CP Mustapha Dandaura, Police operatives attached to Special Anti Robbery Squad (SARS) and operation “Puff Adder” in conjunction with local vigilante arrested at upper Iweka Onitsha, one Ugwuanyi Ifeanyi ‘m’ aged 21 years and one Sopulu Ugwoma ‘m’ aged 22 years.

The suspects who hail from Nsukka, Enugu State are among the hoodlums terrorising Upper Iwekka and Owerri road axis. A single barrel fabricated short gun was recovered from them as exhibit.

The case is under investigation after which suspects would be charged to Court for prosecution.

It would be recalled that on the 9/5/2019 the Command had mobilized personnel and logistics at upper Iweka to curtail the menace of robbery and handbags snatching syndicates in the area through operation Puff Adder.