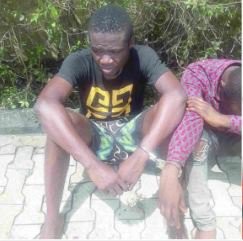 A man identified as Tunde Akinboyewa, and a suspected cult member/rapist, Tunde Akinwumi, while being paraded by the Ondo State Police Command, confessed that they engage secondary school girls for marathon sex.

Reports have it that the suspects usually target secondary school girls hanging out in night clubs in Ondo.

Speaking on the mode of operation, one of the sources that gave policemen a tip-off on their activities, said that members of the group would visit night clubs at weekends and make friends with underage girls there and invite them to their homes for the night.

“Once the victims get to their houses, they are prevented from leaving for days and not until all the five suspected gang members had raped them in turns”, the source reveals

But one of the suspects while speaking with Vanguard, stated that they are not kidnappers as alleged by the police and the girls gave their consent to the sex marathon.

“We usually visit night clubs where we pick girls, take them home and have fun with them. Many of them oftentimes prefer to stay for days because we usually spoil them”, the suspect said. “Our targets are usually girls under 20 years”.

However the Commissioner of Police in the state, CP Udie Adie said that acting on a tip-off of a kidnapping gang at a location, police detectives in Ondo arrested the two suspected cultists/rapists, while the others are still at large.