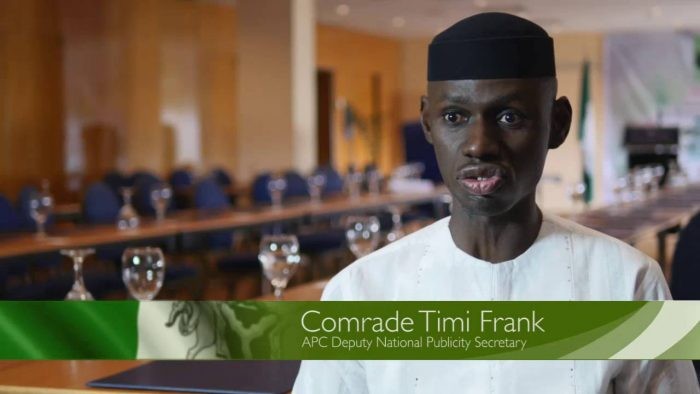 Frank said this in a statement on Sunday in reaction to a report by The Economist Magazine that Nigerians have become the poorest citizens of a country in the whole world, under President Muhammadu Buhari’s first term in office.

He lamented what he called the gradual extermination of Nigerians through poverty is an incontrovertible fact that the present government has refused to acknowledge.

“The reality on our streets speaks to that of a failed country. But the agony and irony of this precarious situation is that General Buhari and his boot lickers continue to deny the reality which their actions and inactions have foisted on the people,.

“General Buhari has failed to recognize that a democracy is not a military government. He has failed to realize that you cannot run a multi-ethnic and pluralistic society on the principle of command and control which has been his hallmark as an unreformed and unrefined General in a democratic dispensation.”

He decried that while the world has since given up on Nigeria as a failed state, General Buhari is destroying it further with his archaic and centrist disposition.

“It is not that there are not enough courageous and patriotic men in the corridors of power today but in an attempt to escape the unmitigated poverty that the reign of General Buhari has foisted upon Nigerians, they have been forced to toe along.

CHECK IT OUT:  Rugged Man Replies Naira Marley After Saying “Yahoo Is Not A Crime” (READ WHAT HE SAID)

“They have acquiesced like men whose consciences have been singed with a hot iron. Their major preoccupation is scrambling for the partition of the economic soul of the country to gratify their unbridled avarice and lust for ephemeral material gains.

“General Buhari and his minions have Nazified Nigeria. The Nazification is a grand plot by the regime to exterminate Nigerians with poverty, banditry and economic woes now rife across the country.

“How can General Buhari be in charge of the Executive, do the work of the Legislature and run the Judiciary? General Buhari’s command and control style of governance did not work when he was Head of a military junta, it has not worked in the last four years, it is not working now and it will never work.

“We can no longer afford to let the IMF, World Bank, China, development partners and donor agencies to bail us out of this deadly economic quagmire.

“This is the time to arise and take back our country if peradventure we can stop the drift and make life bearable for the over 90 million Nigerians now living in abject poverty and hopelessness.

“Many are perishing those that are fortunate to be alive daily contend with harsh and unimaginable livelihoods. Unemployment pervades the land. Incomes are declining. Healthcare is unaffordable. We still lack basic amenities.

“We are confronted by bandits and kidnappers on our bad roads, killed in our villages by insurgents. We have been besieged in our own country by a Pharaonic regime.

“Except we speak up, we may all likewise perish. God forbid! I believe that there remain enough good and patriotic men in Nigeria to confront this evil regime and stop the country from sliding irretrievably,” he added.

CHECK IT OUT:  “I Only Owe 4 Months Salaries” – Gov. Yahaya Bello