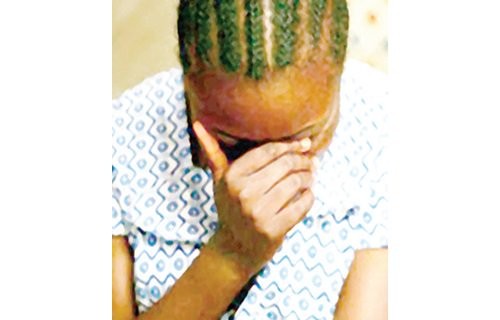 An Ikeja Sexual Offences Court, Lagos State has been told how a suspected armed robber, Babatunde Oluwaleke, sexually assaulted a teacher in her home, using polythene bag as a condom.

According to NewTelegraph, the teacher, names withheld, working with a Catholic Secondary School in Lagos, told the court how Oluwaleke raped her in her home. The rapist, however, came with his partner, Daniel Ojo.

Oluwaleke and Ojo were arraigned for rape and armed robbery.

While being led in evidence by the state counsel, Mr. Akin George, the teacher gave a graphic account of how she was r-ped in her home on March 6, 2018.

She told the court that between 2a.m. and 3a.m., while asleep in her bedroom, she was awaken by a noise. When she opened her eyes, she saw two men. They ordered her to get up.

She said: “The first defendant, Oluwaleke, said I must produce money or he would kill me. I started pleading. The second defendant, Ojo, said that they should leave, that they didn’t come to kill.

“I had on a wrapper; the first defendant asked me to lie on the bed. I begged him, but he pushed me down on the bed. I begged him not to rape me. I told him to take my ATM and mobile phones; those were the items of value with me. He brought out a knife, placed the tip on my stomach and threatened to stab me if I didn’t cooperate. When he opened my wrapper, he saw that I was menstruating.

I don’t know from where he produced a polybag. He tied the polybag around his penis and inserted it into my vagina. I told him that I could be his sister, he shouted at me to shout up. Much later, he removed the polybag and raped me using nothing.”

CHECK IT OUT:  BBNAIJA!!! Sex Therapist Give Shocking Reasons Why Khafi Has Sex Severally In The House

The teacher said that the second defendant repeatedly told Oluwaleke that what he was doing was not what they came to the house to do.

The lady said that while this was going on, her mother and her friend were fast asleep in the sitting room. The robbers had already searched the handbags of the sleeping pair and scattered the contents on the ground. The teacher later woke the pair and narrated the incident.

She said: “We stay in a one-storey building. We went downstairs, where my younger brother stays and noticed that the robbers used a rope to tie the door of the mosquito net, which is attached to a spring, so that it wouldn’t make a noise. My younger brother was also still asleep with his friend, when we woke them. We told them what happened and then took inventory of all the property that was stolen.”

The teacher said members of her family immediately reported the incident to the authorities. She was taken to the hospital for medical examination and counselling.

She was also taken to the Afonka Police Station, Alimosho, Lagos, where four recently apprehended armed robbery suspects were shown to her for identification.

She said: “Immediately I saw the first defendant, I recognised him. Even with my eyes closed, I can identify him. I identified him to the police, wrote a statement and went home. The case was transferred to the Special Anti-Robbery Squad (SARS). My lord, I want a fair justice to be served in this case.”

Justice Abiola Soladoye adjourned the case till September 30 for cross-examination of the witness.

CHECK IT OUT:  Presidency Speaks On Buhari Sidelining Osinbajo In Governance