The Love I Have For My Boyfriend Made Me To Join Cult – 14 Year-Old Girl - NaijaCover.Com
Skip to content 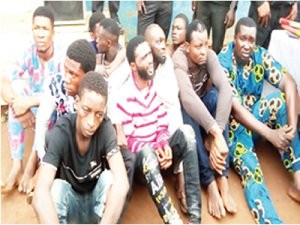 Policemen have been left stunned after a 14-year-old girl confessed in Lagos that she joined a cult out of love for her boyfriend. The girl said that her boyfriend belonged to Eiye confraternity.

According to NewTelegraph, when she became a member, she was made a spy for the group.

She said: “When we started dating, I didn’t know he was into cultism. It was after a while that I discovered. And because of the love I have for him, I joined cultism. Since I joined, I have not gone home. I stay with my boyfriend in his parents’ house. After the group had studied me for long, I was converted to be spying for them. My work is to lookout for policemen and other security agents. I also cook for them.”

Also arrested is a 41-year-old man, Omidele Yusuf, who introduced himself as ‘Elder in Council for Eiye Cultists.’

The suspect said that he renounced his membership of Eiye confraternity after he was released from prison in 2014. This was even as police insisted he had a case to answer.

Yusuf said: “I was sentenced to prison in 2012 for murder. It was in the prison that I met a pastor, who preached to me. What he told me changed my life for the better. When I eventually came out, I told my gang that I had become born again. Since I came out of prison, I have been assisting the police and local vigilantes to arrest cultists in Ikorodu whenever there was a clash. It was this recent clash that made police to arrest me.

My former member was killed alongside his girlfriend. I went to the scene with some of my friends to get first-hand information. That was when the police arrested me. It was as a result of the death of the couple that triggered the killings in Ikorodu by rival cult groups on Thursday and Friday. I don’t know anything about the clash. I still don’t understand why police arrested me.”

CHECK IT OUT:  “This Is The Dread You Said You Want” – Zlatan Wears New Look For DJ Cuppy (Photo)

The suspect was arrested in Ikorodu area of the metropolis. The state Commissioner of Police, Zubairu Muazu, who went to Ikorodu Police Station to launch, ‘Operation Crush,’ following increasing disturbances of cultists in the axis, also seized the opportunity to parade 202 suspected members.

Speaking about Yusuf’s case, a police source said: “The suspects and his gang have a case to answer. They cannot claim ignorant of the clash that consumed 15 lives in the community within two days.”

Muazu said: “We are here today to launch a special operation, to completely end the menace of cultists in the state. We’re also reeling out our success recorded in the fight against cultists and other criminals in the last six months.”

He explained that from February 2019, when he assumed office as the number one policeman in the state, the command had arrested 202 notorious cult members. The commissioner said that the suspects had all been charged to court.

He added: “We have recovered 54 assorted weapons. We have also arrested 105 suspects for armed robbery and seven for kidnapping. The command has also successfully foiled 93 armed robberies through prompt responses to distress calls from members of the public at different locations in the state.

“Tackling cultism in the state requires a holistic approach. We’re adopting community policing approach. We would also embark on sensitisation programmes in collaboration with Police Community Relations Committee and other stakeholders in schools, neighbourhoods and media. We will equally establish Police Students Relations Committee, comprising all the students’ union presidents and other students’ leaders.

CHECK IT OUT:  Unknown Young Woman And Her Child Involved In Accident In Zamfara (Photos)

“We have observed the activities of these cult groups and gangs for the last one month, and credible intelligence has been gathered. We have reviewed our strategies to totally eradicate the menace. We have also rejigged our Anti-Cultism Unit to effectively combat the miscreants, who have chosen the wrong path of life. We would fish them out, isolate and bring them to justice.”

We are battle ready to uproot every cultist’s den and hideouts’ until they are totally defeated.”

The post The Love I Have For My Boyfriend Made Me To Join Cult – 14 Year-Old Girl appeared first on Naijaloaded | Nigeria’s Most Visited Music & Entertainment Website.