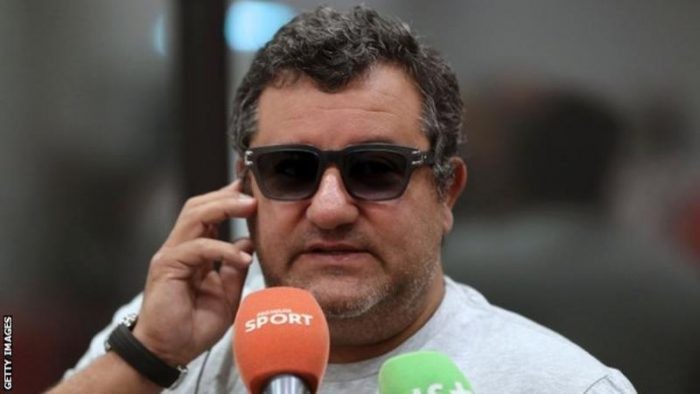 Paul Pogba’s agent Mino Raiola has had a three-month worldwide ban from football activity suspended by the Court of Arbitration for Sport (Cas) after he filed an appeal.

Raiola, 51, was initially banned by the Italian Football Federation, before Fifa’s disciplinary committee extended the sanctions worldwide in May.

He may resume activities outside of Italy as Cas processes his appeal.

Cas says a final decision will be confirmed at the beginning of July.

Raiola’s initial ban would have ended after the English summer transfer window closes, and he may now seek to complete deals for his players before next month’s uncertain verdict.

The agent, who represents various high-profile players including LA Galaxy striker Zlatan Ibrahimovic and in-demand Ajax captain Matthijs de Ligt, said the initial sanctions in Italy were “based on false grounds and lies”.

He claimed the actions against him were based on “political willing” within the Italian Football Federation.

Speaking in May, he said: “I guess the FIGC has not forgiven me for when I diffused my critics for their role in the disastrous state of Italian football, as well as their role around the latest episode of the racism problem, and my opinions could have had an influence in the evaluation of the matter.”