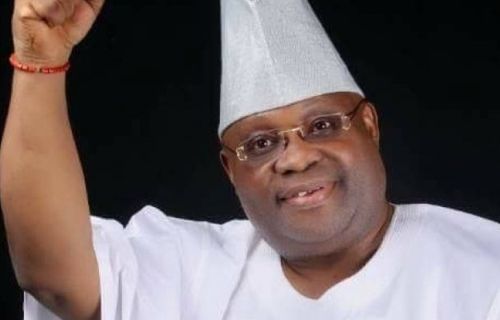 The Peoples Democratic Party (PDP) flag bearer in the September 22, 2018, gubernatorial election in Osun, Senator Ademola Adeleke, on Thursday declared he would become the governor of the state by next week Friday.

He expressed optimism that the Supreme Court judgment slated for July 5 in the appeal filed against the Court of Appeal ruling that declared incumbent Governor Gboyega Oyetola would be in his (Adeleke) favour.

The apex court had fixed July 5 for judgement on the petition Adeleke filed against the candidate of the All Progressives Congress (APC) in the election, Oyetola, who was returned elected by the Independent National Electoral Commission (INEC) after the conduct of the rerun poll.

Adeleke, who spoke at the PDP secretariat in Osogbo tasked members of the party to remain calm and prayerful ahead of the July 5 judgment so that they can get a favorable verdict.

Exuding confidence on the expected judgment while receiving the Osun West Action Democratic Party (ADP)’s Senatorial Candidate for 2019 elections, Dr. Dotun Babayemi and his supporters into PDP at the party’s secretariat, Adeleke, who was represented by the chairman of the party in Osun, Hon. Soji Adagunodo, the state party chairman assured that the state would witness a new dawn of development when he assumes office.

Receiving the decampees, the PDP South West zonal chairman, Dr. Eddy Olafeso, lauded both new and old members of the party for their commitment and just as he vowed to give necessary support towards ensuring unity among them.

Responding, Dr. Dotun Babayemi, said he and his supporters decided to join the PDP because of their belief in the party and prayed for Adeleke’s victory in his case before the Supreme Court.

CHECK IT OUT:  Submit Yourself To Kano Anti-Graft Agency, CSO Advises Emir Sanusi

He stated, “we pray for PDP’s victory in the matter before to the Supreme Court. We believe in the party and we shall join forces to reposition it.”

The post Do You Agree??”I Will Be Osun State Governor By Next Friday” ― Ademola Adeleke appeared first on Naijaloaded | Nigeria’s Most Visited Music & Entertainment Website.