[A Must See] 5 Most Dangerous Cities You Should Never Visit In Nigeria - NaijaCover.Com
Skip to content 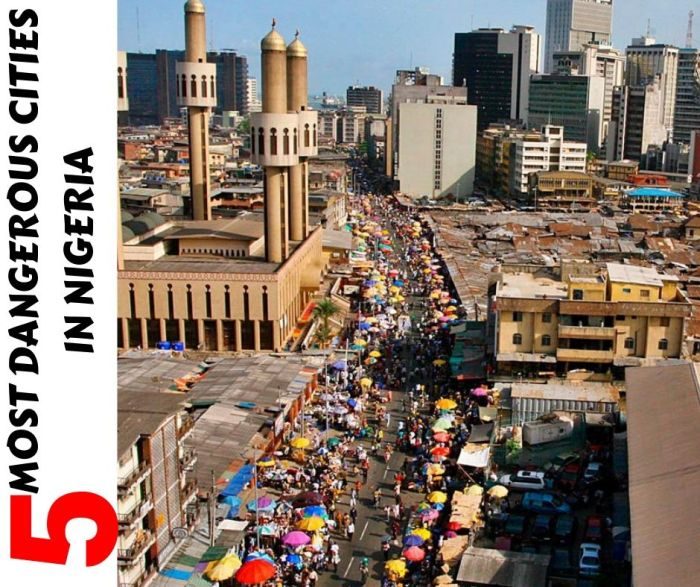 Within the past six years Nigeria have witnessed series of social unrest and crisis ranging from the menace of the deadliest terrorist group in the world, Boko Haram and the Fulani herdsmen.

The menace these groups have severely affected life and socio economic activities in different parts of the country.

Below are the top five most dangerous places in Nigerian

Adamawa State has Yola as its capital. It is located in the North Eastern part of Nigeria.

Adamawa State which was initially a quite and peaceful state have been deserted by indigenes of the state following series of attack on churches, mosques and markets by Boko Haram.

Over 5000 people have been killed and properties worth millions have been destroyed.

Yobe state is next on the list with series of bomb explosions in churches, mosques and markets which have left over 7000 people dead.

Yobe State which is located in the North Eastern part of Nigeria with Damatru as its capital is one of the most dangerous places in Nigeria with the incidence of Boko Haram in the state.

Former President Goodluck Jonathan ones placed a curfew in Bauchi State following the unrest in the state due to the incidents of Boko Haram which have left thousands killed and properties worth millions destroyed.

Bauchi state is located in the North Eastern part of the country.

In 2012 Boko Haram terrorist group attacked Kano state in revenge killing over 150 civilians. Kano unrest is not far from the actions of the deadliest terrorist group in the world.

Just like in other states Boko Haram have attacked churches, mosques and markets crippling socio economic activities in the state.

CHECK IT OUT:  Regina Daniels Sparks Pregnancy Speculation After She Posted A Bathroom Video (Watch Video)

Borno state is located in the North Eastern part of Nigeria. Borno state have had the highest casualties to boko haram attack.

In 2013, 219 students were abducted from Chibok secondary school Chibok Borno state and are yet to be found. This has led to the #bringbackourgirls campaign to secure the release of these girls.

Nigerian government in 2015 moved its defence headquarters to Borneo State in a move to combat boko Haram.

Which Of The Cities Do You Find More Dangerous?

Let’s hear from you

The post [A Must See] 5 Most Dangerous Cities You Should Never Visit In Nigeria appeared first on Naijaloaded | Nigeria’s Most Visited Music & Entertainment Website.