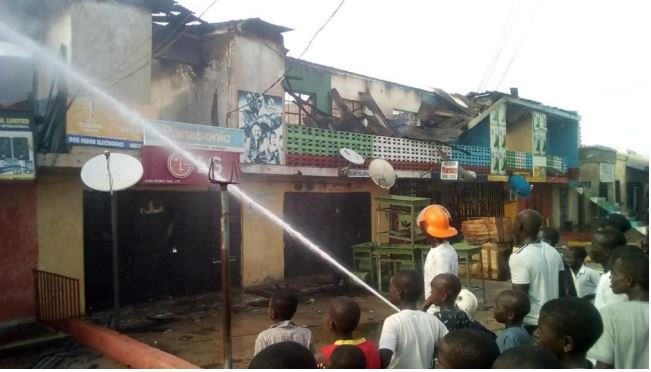 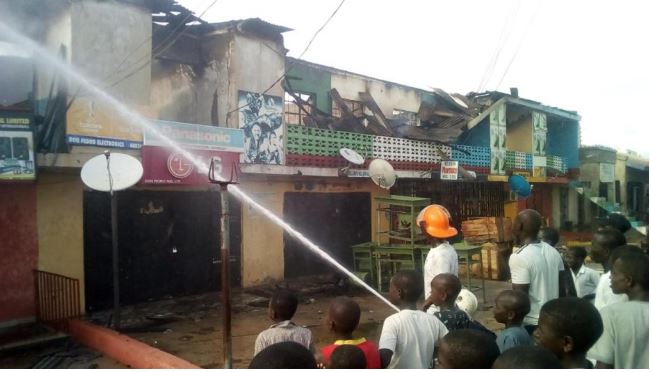 A block of shops and residential apartments in the Adamawa State capital, Yola, have been gutted by fire.

The building, strategically located at Mubi Roundabout, a famous place in the heart of Jimeta, has eight shops on the ground floor and a number of flats on the top floor, some used as residential quarters and others as offices, including one used for governorship campaign in the last circle of elections by President Muhammadu Buhari’s inlaw, Ahmed Halilu Modi.

The fire, which occupants of the building attributed to electricity power upsurge from the public supply, got the occupants rushing out their wares and personal effects to save them from total destruction.

The top floor was particularly affected, with the roof burnt off and the walls charred and cracked, but all occupants were thrown in disarray and traffic around the busy Mubi Roundabout disrupted while the fire lasted.

It took fire officials operating a fire truck from Adama Beverages Limited, a water and juice processing company owned by former Vice President Atiku Abubakar, to put off the fire after a while.

A shop owner in the building, who identified himself simply as Big Andy, said the occupants of the building were lucky that the fire occurred when they were still running their business.

“This thing started around 3pm. That’s our luck. If it had happened when we have closed, we would have lost our things,” he said.