SHOCKING: Man Finds Himself In Ibadan After Answering An Unknown Call In Lagos - NaijaCover.Com
Skip to content 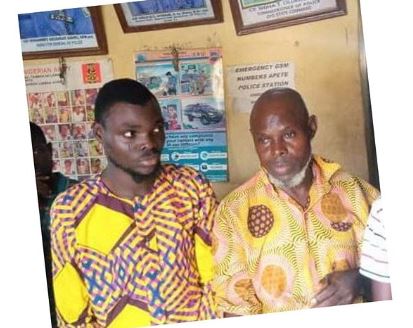 A Lagos-based man, Mathew Isichei Chukwuebuka, has narrated how he mysteriously found himself in Ibadan, Oyo State, after answering a phone call from a father and son kidnap gang.

The victim told the Lagos State Police Command that he was called through his phone and doesn’t know how he got to Ibadan. Mathew said upon his arrival, he was given something from a black pot to eat, causing him to lose his senses.

The victim was ordered to surrender his phone to them and the phone was programmed to reject any incoming calls except the only line that they were demanding ransom through. .

Chukwuebuka told the police that his abductors collected all the money in his possession and were demanding for more. He said they also took him to an ATM point where they withdrew the sum of N10,000 from his account.

They demanded a ransom of N30,000,000 to be paid into the victim’s bank account. He was detained in their custody for a period of 9 days without being fed.

The post SHOCKING: Man Finds Himself In Ibadan After Answering An Unknown Call In Lagos appeared first on Naijaloaded | Nigeria’s Most Visited Music & Entertainment Website.

CHECK IT OUT:  ‘Why Rivers State Should Change The Name Of Its Capital From Port Harcourt’ – FFK