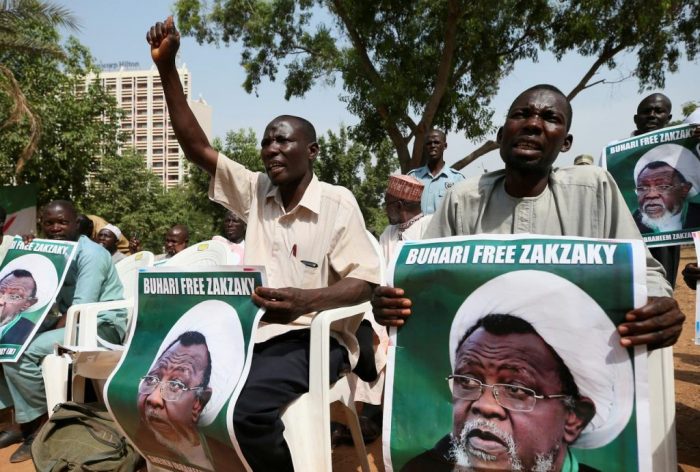 Members of the Islamic Movement in Nigeria, IMN, have denied killing a Deputy Commissioner of Police (DCP) and burning the outpost of the National Emergency Management Agency (NEMA) in Abuja.

We had earlier reported that no fewer than six members of IMN, otherwise known as Shi’ites, and a journalist with Channels TV, were feared dead in a bloody clash involving the Muslim sect and the police in Abuja on Monday.

Speaking with us in Abuja, Abdullahi Musa, the Secretary of IMN’s Academic Forum, said the protest by the sect over government’s illegal detention of their leader, Sheikh Ibraheem El-Zakzaky, had been peaceful before armed policemen attempted to forcefully disperse them near the Federal Secretariat.

According to him, “Security forces led by the Nigerian police shot at our members and injured many others. I can confirm to you that, we have carried away six dead bodies belonging to our members.

“The security agents also lifted some corpses to unknown destinations. We are yet to account for some of our members who came out to protest today. We believe the number of casualties may increase before today ends.”

The IMN scribe also dismissed claims that members of the Islamic group provoked the police through undue confrontation before the shootings began.

“Our protest began from NITEL junction through Ahmadu Bello Way to the Federal Secretariat. On our arrival, we were still prepping to pray and disperse peacefully before live ammunitions were released at our members to forcefully send us home. We were unarmed.

We couldn’t have confronted armed policemen,” he added.

He accused security operatives of masterminding the vandalization of public properties and the killing of DCP Umar after the shootings to win public sympathy.

He said, “No member of our movement was involved in the setting ablaze of vehicles and the outpost of NEMA as alleged. But we know the authorities have been making frantic efforts to blackmail us and sway the public sympathy against IMN and Sheikh El-Zakzaky.

“We are aware the police have been sending paid agents in plain clothes to infiltrate our meetings and disturb public peace in the name of IMN. But the Nigerian people are already frustrated and oppressed by this administration. The government can’t get the public sympathy they desire, because its agents are committing crimes against humanity.”

Recall that the Muslim sect had last week clashed with the Police which resulted in several deaths, injuries and destruction of vehicles near the National Assembly.

In view of that, the Police restricted all street protests to the Unity Fountain in Abuja.

But the Shi’ites defied the police order, vowing o continue their protests on the streets of Abuja until the government implemented a 2016 Order of the Federal High Court, Abuja, directing the unconditional release of Sheikh El-Zakzaky.