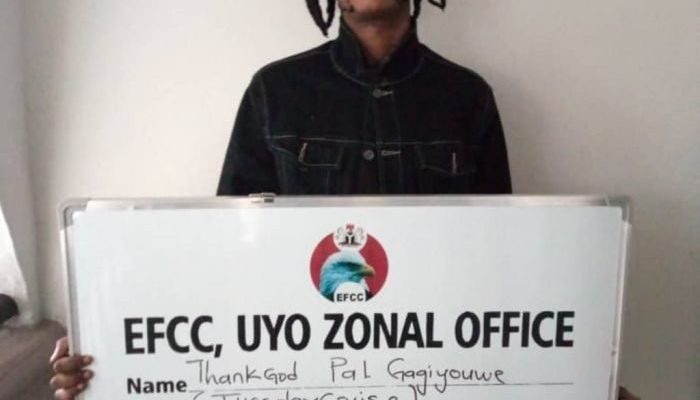 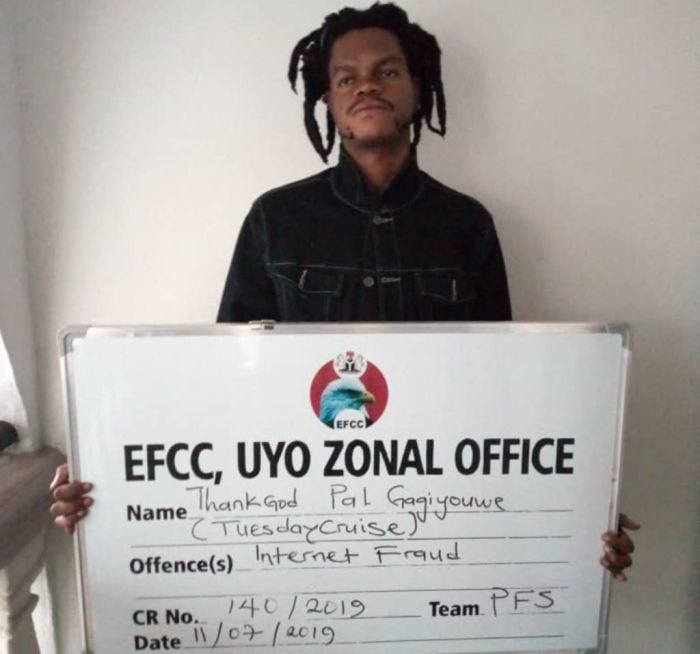 ThankGod, a 25-year-old popular entertainer in Port-Harcourt, with the stage name “Tuesday Cruise” was arraigned on July 24, 2019, by the Uyo Zonal Office of the Economic and Financial Crimes Commission, EFCC, on a one-count charge.

“That you, Gagiyouwe Pal Thankgod (alias Chris Henry) on or about the 11th day of July 2019, in Nigeria within the jurisdiction of this honorable Court, fraudulently impersonated one Chris Henry by using his email addresscchrishenry560@gmail.comwith the intent to obtain money, property or any advantage from one John Smith and other unsuspecting persons, the pretence you knew to be false and thereby committed an offence contrary to Section 22 (2 ) (b) (ii) & (iii) of Cyber Crimes (provision, prevention, etc) Act, 2015 and punishable under Section 22 (2) (b) (iv) of the same Act.”

He pleaded “guilty” to the charge, and in view of his plea, counsel for the EFCC, Adebayo Soares prayed the court to convict and sentence him accordingly.

Justice Mohammed, thereafter, convicted and sentenced him to six months imprisonment with an option of fine of N200,000 (Two Hundred Thousand Naira) only.

According to Tony Orilade, EFCC spokesman, the musician’s journey to prison began on July 11, 2019, when he was arrested along Edet Akpan Avenue (Four Lanes) in Uyo by operatives of the Commission, following intelligence report.

At the time of his arrest, a laptop was found on him and a forensic analysis of it led to the retrieval of various scam documents, which the convict admitted to have sent out to mainly female foreign nationals with the aim of fleecing them of their hard-earned money under various disguise.

CHECK IT OUT:  BREAKING NEWS: Femi Gbajabiamila Nominated For House Of Reps Speakership