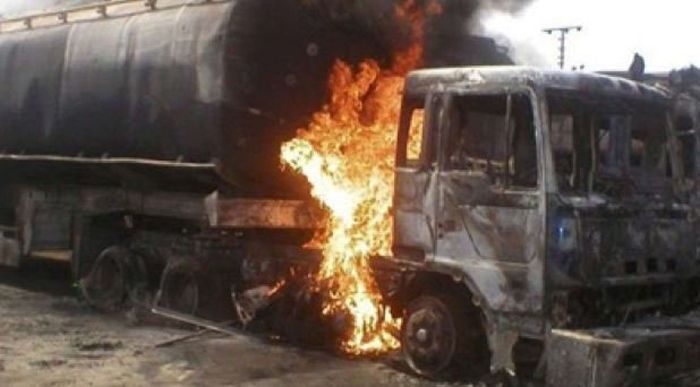 At least 15 people lost their lives yesterday at the popular Dakwa junction in Madalla Niger State, on the outskirts of the Federal Capital Territory (FCT), Abuja in an accident involving a gas tanker, a Sharon car and several tricycles popularly called Keke Marwa.

Witnesses, among them an official of the Federal Road Safety Commission (FRSC) drafted to accident scene on rescue mission, told New Telegraph that the accident, which occurred about 2.50p.m., was triggered by loss of control on the side of the tanker driver.

The tanker driver, the FRSC official said, had successfully dodged a cyclist (an okada rider) who suddenly crossed highway from the opposite direction.

He explained that while the tanker driver was able to dodge the cyclist, he lost control of the vehicle and rammed into a stationed Sharon car with unspecified number of passengers. All the passengers, including the driver, died.

The tanker, he added, crushed several tricycles parked on the roadside with their operators and passengers inside.

New Telegraph counted five badly damaged tricycles and a makeshift shop which was severely destroyed by the truck.

A witness said: “You know this spot is notorious for truck accidents. The truck, which we later discovered to be carrying gas, was heading to Kaduna Road from probably inside Abuja. An okada rider, with a female passenger, crossed from the opposite direction.

He crossed from in between Eco Bank and Oando filling station. The tanker driver dodged him, but lost control of the tanker in the process. The Sharon space bus parked with passengers by roadside was crushed. It went down further the slope crushing several tricycles waiting for passengers.”

CHECK IT OUT:  You Commoners Have No Voice In Nigeria – Big Man Says After Bashing A Photographer’s Car Twice (SEE PHOTO)

The victims’ bodies had been evacuated to the morgue of the General Hospital, Suleja, while the injured were admitted at the same hospital for treatment.

The spot, the Madalla market axis, is notorious for accidents. There had been attempts in the past by Niger State government to relocate the weekly market to a safer location but it never worked out.