One Dead, Five Injured As Truck Runs Into Building In Ogun - NaijaCover.Com
Skip to content 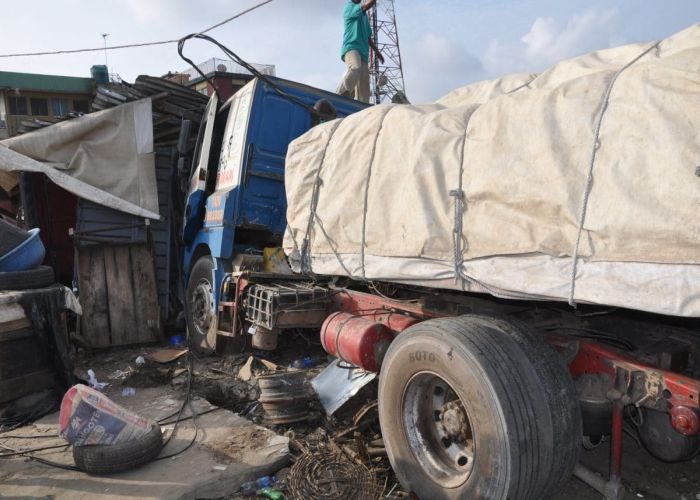 The driver of a truck in the early hours of Thursday lost control and rammed into a building at Ijaye in Abeokuta, killing a nine-year-old boy and injuring five occupants of the building.

Mr Babatunde Akinbiyi, the Spokesperson, Traffic Compliance and Enforcement Corps (TRACE), confirmed the incident to the News Agency of Nigeria (NAN) in Abeokuta.

Akinbiyi, who noted that the incident occurred around 3:46a.m on Ijaye -Iyana Mortuary axis in Abeokuta, said that the driver of the truck took to his heels immediately after the accident.

He alleged that the accident was caused by speeding and loss of control by the truck marked LND-754 XV.

He explained that there were eight occupants in the building, comprising of one female adult, three female children, two male children and two male adults, when the incident happened.

“I learnt the truck was coming from the Iyana-Mortuary axis inbound Itoku when it suddenly lost control due to speeding, crossed the culvert and rammed into the shops and the house behind it.

“The little child who lost his life in the accident was around 9 years old and he has also been taken to Ijaiye General Hospital mortuary,”

He added that the injured persons were taken to the General Hospital, Ijaye, Abeokuta, for treatment.

The post One Dead, Five Injured As Truck Runs Into Building In Ogun appeared first on Naijaloaded | Nigeria’s Most Visited Music & Entertainment Website.