THIS IS SAD! 5 Persons Dead As 2 Buildings Collapse (Photo) - NaijaCover.Com
Skip to content 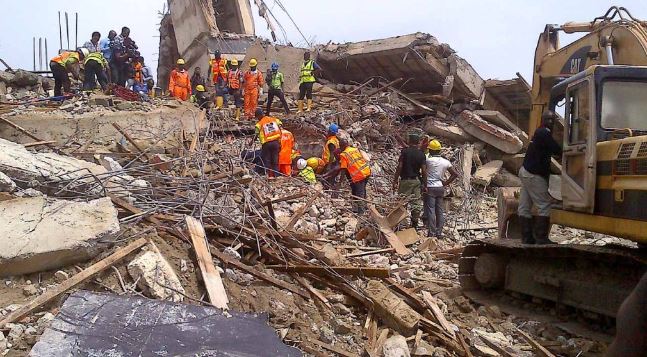 Five persons were killed on Monday when two residential buildings collapsed in Kuraduge and Madachi villages of Kirikasamma Local Government Area of Jigawa.

According to NAN, Alhaji Salisu Garba-Kubayo, Chairman, Kirikasamma Local Government, who spoke on the development, said that the houses collapsed “during a heavy rainfall”.

“Three persons – a mother, Halima Manu, her daughter, Aisha Manu, and son, Dauda Manu, were killed in Kuraduge village, while a man, Musa Wuliwuli, and his wife, Hauwa Musa, were killed in Madachi village.

“The rain also destroyed 200 houses in Kukadabu, 100 houses in Mattafari and 30 houses in Kuraduge,” he said, adding that most parts of the local government were affected by the flood disaster.

He called on the Jigawa and Federal Governments to come to the aid of the victims.

“As we speak, more than 30 villages in Kirikasamma have been taken over by flood as a result of heavy rain.

“We have provided thousands of sacks to residents of these villages to erect sand-bag embankments to check the flood; they have spent days and nights doing this.

“But, containing this problem is beyond our capacity; we want the Jigawa and Federal Governments to come to our aid,” he pleaded.

CHECK IT OUT:  ‘Coronavirus has humbled everyone’ – Actress, Mercy Aigbe cries out