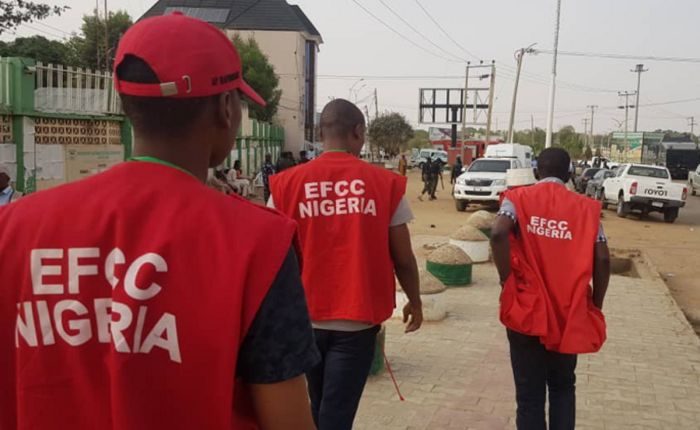 The commission arrested FUNAAB and MAPOLY students after storming the Ibogun campus of the OOU in the Ifo Local Government Area of Ogun State to arrest 18 students of the university.

The EFCC officials were said to have arrived at some students’ hostels around 12 a.m. on Tuesday and broke in through the windows and the doors before making arrests, taking away cars, laptops, and phones belonging to students who they alleged to be internet fraudsters.

In Abeokuta, the EFCC stormed students’ populated areas like Safari, Abule-Ojere, Gbokoniyi, Kemta and Alabata, all in Abeokuta, to arrest MAPOLY and FUNAAB students.

Meanwhile, the Public Relations Officer of Moshood Abiola Polytechnic Students’ Union Government, Johnson Idowu, said the school had not received any report of the arrest of MAPOLY students by the EFCC.

He said, “We learned that the EFCC came to Abeokuta, but there was no pictorial evidence to prove that.

“We have not received any report that our students are among those arrested.”

However, spokesman for the EFCC, Wilson Uwujaren, confirmed the operations.

Uwujaren said about 30 people were arrested over alleged fraud.

“Yes, our people are there for an operation and made some arrests.

“At the moment, they are screening them and once they finish the screening, those who are not linked to the crime will be allowed to go home while we will continue with further investigation.”

CHECK IT OUT:  Ogun: I Inherited A Failed State – Gov. Amosun