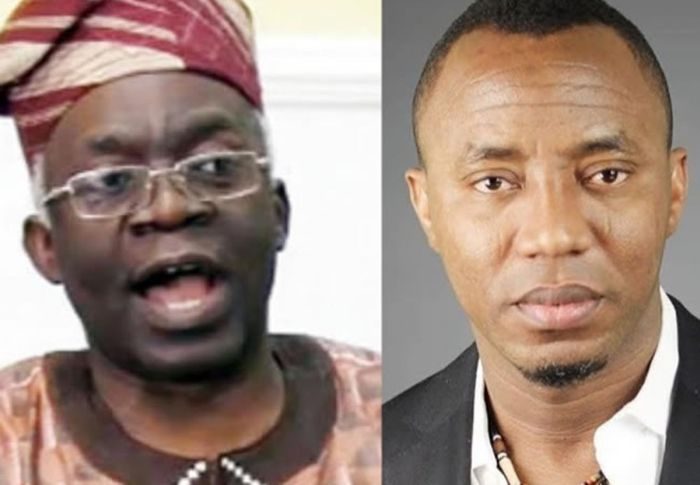 Femi Falana, lead Counsel of embattled #RevolutionNow convener Omoyele Sowore has alleged that the Nigerian government is plotting a fresh charge against his client whose bail conditions was perfected last week.

Recall that the DSS had previously claimed that they refused to release Omoyele Sowore because no one came for him. However after lawyers, supporters and family members of the activist showed up at DSS headquarters in Abuja on Saturday November 9, the media personality who is facing charges of treason and insulting President Buhari was still not released.

Speaking at a Channels TV programme on Monday November 11, Femi Falana said Sowore is yet to be released because the Nigerian government wants to extend his detention.

The Senior Advocate of Nigeria also claimed that he was reliably informed that the DSS is looking for new evidence to ensure they further detain the #RevolutionNow convener.

“I was reliably informed last night by a security official that the government was currently fishing for evidence,” he said.

“An attempt is being made to file a fresh charge on Tuesday so that there will be an excuse that ‘we are arraigning them in court, hence we are unable to release them’.

“If you recall, that was what was done when Justice Taiwo Taiwo granted Sowore bail on September 24. For a whole week, the order of the court was flouted. And then, of course, on September 30, he was arraigned together with Olawale Bakare. We are ready for them.”

Sowore’s lead counsel further stated that they will be filing contempt charges against DSS Director-General Yusuf Bichi, following the secret police’s refusal to release the media personality even after perfecting his bail conditions.

Falana also accused the Nigerian government of obeying only foreign court orders but disobeying orders issued by courts in the country.

He backed his claim by pointing out that the FG hurriedly obeyed a British Court order to pay the sum of £250,000 cost to a foreign firm, Process and Industrial Development as condition to appeal a controversial $9.6bn judgment.

“The Federal Government has alleged that the controversial judgment debt of $9.6bn was obtained fraudulently by P & ID. But the commercial court in London recently ordered Nigeria to pay £250,000 within 14 days as a precondition for filing an appeal against the judgment.

“The said sum of £250,000 has since been paid to P & ID in strict compliance with the orders of Her Majesty’s High Court in London.

“But since national security takes precedence over the rule of law at home, the orders of the Federal High Court for the immediate release of Messrs Sowore and Bakare have been brazenly disobeyed by the State Security Service”