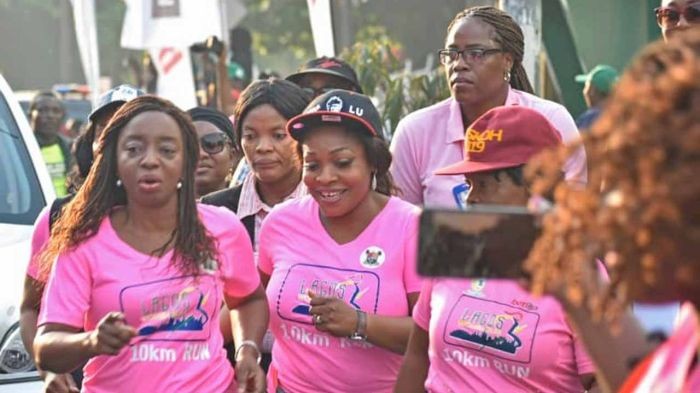 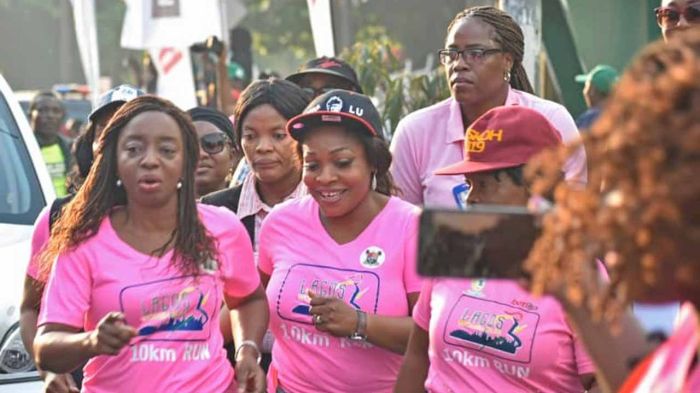 Lagos State First Lady, Dr. Ibijoke Sanwo-Olu at the weekend set the record in Nigeria as the first governor’s wife ever in the history of Nigerian sports to finish an athletic road race. Mrs. Sanwo-Olu performed the feat at the just-concluded 2019 Lagos Women Run, where she ran the whole 10 kilometres from start to finish.

The First Lady, who was earlier earmarked by the coordinator of the Lagos Women Run, Ms. Tayo Popoola, to flag off the 10 km Road Race from the Tafawa Balewa Square and run only two kilometers out of the official 10 kilometres, said she was encouraged to run the whole course when she saw the multitude of women running the race from the start point.

“When I saw the multitude of runners, I was encouraged to run more distance and even finished the 10km Run, especially when I remembered the theme of the Lagos Women Run which is all about fitness, wellness, women emancipation and campaign against domestic violence.

“I never thought I could go the extra mile but I did when I saw women younger and older than I running.”

Mrs Sanwo-Olu, who is medical doctor, said she felt great about the exercise,

“as a First Lady, I completed a 10 kilometres Road Race. I salute all the women, young and old that participated in the Lagos Women Run.”

The Coordinator of the Lagos Women Run, Tayo Popoola, said “the presence of the First Lady of Lagos State, further boosted the standard of the Run and gave the Women Run added glamour, with other runners getting encouraged to complete the race.

CHECK IT OUT:  JUST IN!!! Edo, Bayelsa, Oyo Speakers Shun Meeting With Buhari

“We were so happy as we saw the November 9, 2019 Women Run encouraged petty women traders who sold their market from Tapioka hawkers to Ofada rice hawkers, food vendors.