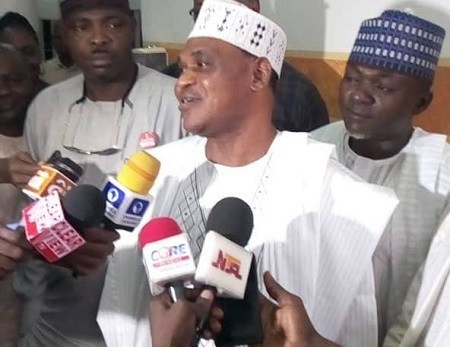 The Kogi State Governor and candidate of the All Progressives Congress (APC) in the Saturday’s governorship election, Alhaji Yahaya Bello, is leading with a very wide margin going by results announced so far by the Independent National Electoral Commission (INEC).

Governor Bello is ahead of the other 23 candidates with over 200, 000 votes margin in 15 out of the 21 local government areas where results have been officially announced.

The APC candidate’s highest win so far is from Okene Local Government, the council area of the incumbent governor where he got a total of 112,764 votes as against Wada’s 139 votes.

The governor also floored the PDP candidate in the Kabba/Bunu, the LGA of Kola Ologbondiyan, the party’s national spokesman.

So far, INEC is yet to announce results from six LGAs of the 21 LGAs in the state.

The collation officers are reporting that thousands of votes were cancelled as a result of violence in some polling units.

Meanwhile, the governorship candidate of PDP, Engr. Musa Wada and his running mate have rejected the result of the election.

Addressing newsmen in Lokoja on Sunday, he said results were being written to favour the APC.

He alleged that the deputy governor of the state, Chief Edward Onoja alongside security agencies, visited the collation centres where results were changed to favour APC.

He also lamented that APC rigged the election with the result of Kogi Central adding that PDP and him will challenge the result in court.

“The result is not a true reflection of what happened. The people of the state voted for PDP but APC changed the result to favour them.

“Results declared so far by INEC is a written result and we can’t accept that. Every single result was changed and we are going to challenge the election. The election is not a true reflection of what happened in the field.

“I am the candidate of the party and I don’t have to wait till they kill me. I have to cry out to the people of Nigeria to know that APC rigged the election.

UPDATES FROM 14 LG’s AS ANNOUNCED AT THE LOCAL GOVERNMENT.

CHECK IT OUT:  “Fix your bitter heart and leave these children alone” – Shade Lapido blasts Kemi Olunloyo for threatening Chioma