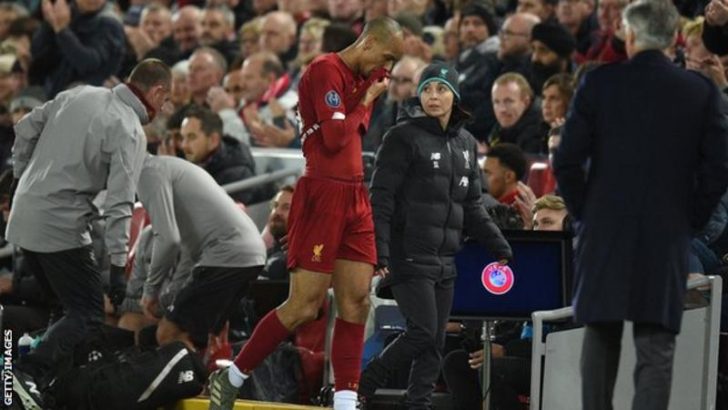 Liverpool face an anxious wait over the fitness of Fabinho after he suffered an ankle injury during Wednesday’s Champions League draw with Napoli.

The Brazil midfielder is suspended for Saturday’s Premier League match against Brighton, but manager Jurgen Klopp is worried he could miss more games.

Liverpool host Everton on 4 December, their first game in a packed schedule for the month.

“I don’t want to say what I expect,” said Klopp.

“It’s early and we all hope it’s not too serious but it’s pretty painful and in an area you don’t want to have pain, around the ankle.”

During that time, the Reds have built an eight-point lead at the top of the domestic table but now face a demanding period, with their draw against Napoli commencing a run of 12 games in just 36 days.

That run includes a trip to Red Bull Salzburg on 10 December, where Klopp’s side will need a draw – or require Napoli to lose at home to Genk – to progress.

“He couldn’t continue. We’ll know more maybe tomorrow or the day after.”

CHECK IT OUT:  ISIS Releases The Names And Picture Of The Sri Lankan Bombers (Read Details)