No Date Yet To Re-open Land Borders – Buhari - NaijaCover.Com
Skip to content 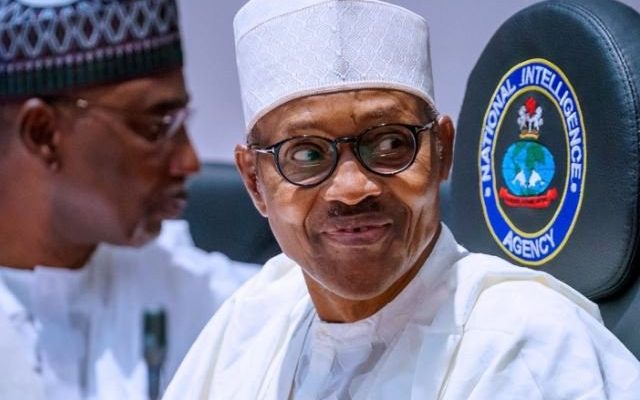 President Buhari has disclosed that there is no date yet for re-opening of the Nigerian border which according to him has led to a drop in the country’s domestic fuel consumption.

The Nigerian leader who is on a 4-day working visit at his hometown Daura in Katsina State told a delegation of Katsina State Elders Forum that he is yet to give a date for the reopening of the land borders.

In a statement released by Senior Special Assistant to the President on Media and Publicity, Malam Garba Shehu, the Presidency said two months into the closure of Nigeria’s land borders to curb smuggling activities especially rice, the Buhari-led administration was betting on the same measure to rekindle the agriculture sector.

President Buhari who acknowledged the hardship residents of border communities have been going through following the ban on sale of fuel at stations 20 kilometers to the border, stated that the restriction was a temporary measure as the Nigerian Customs Service needed to ascertain outlets involved in real sale of products and those being used for smuggling.

The government’s directive will save the country billions of naira on import bills. Receiving a delegation of Katsina State Elders Forum at his country home in Daura, the President said the country’s domestic fuel consumption had dropped by more than 30 per cent, following closure of land borders.

CHECK IT OUT:  22 Killed In Fresh Birnin Gwari Attack, Kaduna

President Buhari said he had not given any date for the reopening of the land border until the situation improves.

The President commended the actions taken by the President of Niger Republic, Muhammadou Youssoufou, including the dismissal of officials and a ban on use of the country as a dumping ground for Nigeria-bound smuggled goods.

President Buhari noted that the measures taken by the President of Niger were helpful and supportive.

President Buhari acknowledged the hardship of border communities following the ban on sale of fuel at stations 20 kilometres to the border, a restriction that also saw to the closure of all fuel stations in his native home, Daura.

”Farmers must be protected. Dishonesty is deep rooted in the country. Otherwise the border closer would not have been warranted,” he said.

According to him, the restriction was a temporary measure as the Nigerian Customs Service needed to ascertain outlets involved in real sale of products and those being used for smuggling.

President Buhari told the delegation that he intends forging ahead with poverty alleviation schemes and the agricultural and livestock reforms started by the administration in the first term, since the election was behind him and a government now in place.

He explained that the reforms, especially those relating to the settlement of livestock herders would take time to accomplish, assuring that his deliberate choice of tested farmers as his past and current ministers of agriculture was informed by the need to carry his vision through.”

The post No Date Yet To Re-open Land Borders – Buhari appeared first on Naijaloaded | Nigeria’s Most Visited Music & Entertainment Website.