JUST IN!!! About 35 Killed, 58 Abducted As Bandits Raid 10 Communities In Kaduna - NaijaCover.Com
Skip to content 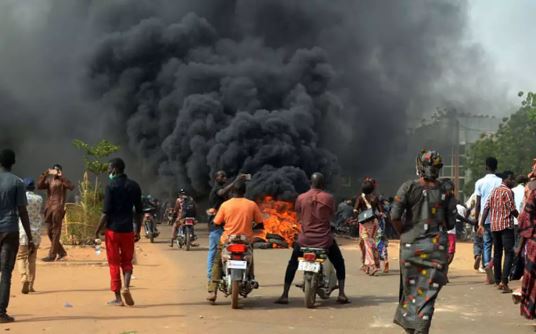 Bandits suspected to be herdsmen have sacked 10 communities in Chikun and Brinin Gwari local Government Areas of Kaduna State.

The bandits, who have established communication links with the relatives of the abducted, were said to be demanding a ransom of N100m.

Speaking to newsmen at the refugee camp at Ungwar Beji, Gora Goran in Chikun local government area, the National President of Southern Kaduna Peoples’ Union SOKAPU, Mr. Jonathan Asake called on the federal and Kaduna state governments to immediately come to the aid of the victims.

He also called on international community, individuals and organisations to render assistance to those who he said are with nothing to hold on as a means of livelihood.

Jonathan Asake lamented, “As you can see from the way these people are, they are seriously traumatized and needed immediate assistance to be able to hold on.

“We have been told that the suspected bandits destroyed all their farm products and also destroyed their houses leaving them with nothing to call their own.

Here at Ungwar Beji, there are about 200 of them with no food, beds or clothes while we are also been told that about 8,000 of them have converged at Buruku with nothing with them.

“Worst of all, most of the children are sick. This calls for concern on all people of good will to come to their aid in any kind in order to give them hope of survival before steps could be taken on the area of their education.”

Earlier, Pastor Habila Madama, who led them out from the bandits said their attackers came since on Monday, 6th January, 2020 killing, maiming and abducting their loved ones unabated till date without any assistance from the state government or any security agency.

CHECK IT OUT:  See What Happened Between Adekunle Gold And A Fan Who Wanted Giveaway (Photo)

He said the bandits started with the destruction of their farmlands, stressing that they are left with nothing because they (Fulanis) will come with their cattle and overtake and destroy everything in the farms.

He called on the federal and Kaduna state governments to take necessary steps to intervene in the situation they found themselves, saying, “As it is now, we don’t know where to go, what do we feed on, where do we get clothes to wear especially own little ones and worst of all, where do we lay our heads?”

He said concerted efforts must be taken by the authorities concerned in order to ensure sanity in our communities for some of us to be able to go back to our ancestral homes to start new lives.

The post JUST IN!!! About 35 Killed, 58 Abducted As Bandits Raid 10 Communities In Kaduna appeared first on Naijaloaded | Nigeria’s Most Visited Music & Entertainment Website.