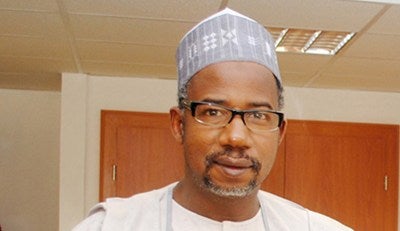 Bala Mohammed, governor of Bauchi state, has dismissed claims that he is on admission at a London hospital.

Mukhtar Gidado, his spokesperson, dismissed the rumour that the governor is hospitalised in London for an undisclosed illness.

The spokesperson, in a statement, said the governor was only away on a medical appointment for a minor procedure and that he returned to his temporary residence the same day.

He said, “The Bauchi State Government has noted with concern, rumors being peddled by some mischief makers suggesting that His Excellency Governor Bala Abdulkadir Mohammed is bed-ridden and cannot be back anytime soon to continue to perform his duties. ”

“Some members of the opposition have, in the wake of the on-going Supreme Court case, unfortunately, insinuated that His Excellency is in the United Kingdom for the ‘long haul’ because of what they term to be his deteriorating Health condition.

“I wish to state that this dubious line of thought exists only in the wicked and diabolical world of the rumor merchants.

“Our Governor was away on a medical appointment with his doctor, had a minor procedure and returned to his temporary abode the same day. He even had a road walk barely 3 hours after the procedure.

“Those who are active on social media must have seen a picture His Excellency personally posted, looking rested and cheerful. I can confirm to the good people of Bauchi State that our Governor will be joining us soon as he personally indicated in a social media feed this morning.

“Finally, the Governor extends his appreciation for the endless prayers, phone calls and messages he has been receiving from the kind and loving people of our State in particular and other well-wishers across Nigeria.”

CHECK IT OUT:  “Thank You For Not Converting Me To Islam” – Rotimi Amaechi Tells President Buhari