They Won’t Tell You They Were Present And Aware Of The ‘audio Signing’ – Peruzzi Fires Back At His Former Boss, King Patrick - NaijaCover.Com
Skip to content 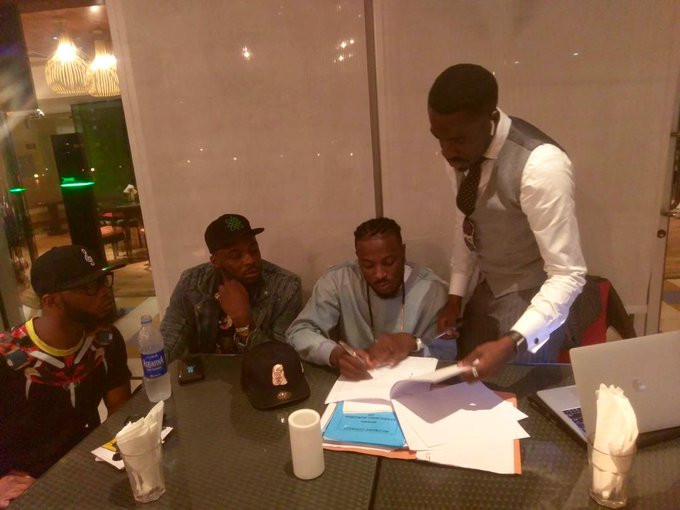 Peruzzi has fired back at his former boss, King Patrick who accused him of breaching his contract and getting ‘audio-signed’ by Davido.

In new tweets shared, Peruzzi attached a photo to back his claim of the Golden Boy CEO being present when he signed his record deal with DMW. He also disclosed that Patrick bought his flight ticket for the meeting with Davido in Dubai.

Surviving A Lunatic. They won’t tell you they were present & aware of the “audio signing”. He was in Dubai at that time. The reason I went there. Patrick bought my flight ticket to go meet David in Dubai

Spent two years making you understand that I don’t need your money. Come closer, nobody is fighting you. I’m just tryna grow & don’t wanna leave you behind Cos “no time”! You agree today and it’s all good

. Tomorrow you go crazy again. “ I know I am bi-polar” you always said!Nahhhh! I don’t need it. He knows where it is.

He done fucked up major that’s why he can’t go pick it up himself. Cos he has insulted the board. So he needs me to fight them to pay him. Nobody needs it.

You spent 48 Million on the guy you signed before me. That was a failure. You no drag am. Why? Offered to send you your money, you said you wanted to collect the money before you sign the agreement.

Who does that? So that you’d turn Richard Branson and start telling stories? Countless times I told you “Guy your relationship with David can help your baby record label, you got plans to sign other people after me so just have a strong relationship with these guys. They’re not fighting you”. You never listened.

CHECK IT OUT:  [Music] Emizy Graceboy – Letter To My Girl

Let’s not talk about drugs. You don’t want that. Someone told you I left him for David When he was the one that bought my flight ticket to Dubai. And you think he’s okay.

Okay. What was the ticket for? Honeymoon?He knows all I wanna do is write and sing and chop this life. I am a music machine, I understand life from a different point.

I write a story doesn’t mean it’s mine to tell. I don’t even give a fuck who tells it! I already set my soul free by writing the story. It’s not that deep

The post They Won’t Tell You They Were Present And Aware Of The ‘audio Signing’ – Peruzzi Fires Back At His Former Boss, King Patrick appeared first on Naijaloaded | Nigeria’s Most Visited Music & Entertainment Website.