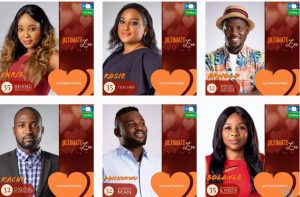 As earlier promised to provide you update on the ongoing ‘Ultimate Love’ reality show which was announced and started by MultiChoice Nigeria, the owner of the popular Television broadcast Satelite known as DStv, on Sunday, February 9, Naija News has deem it fit to compile the profile of every housemate in the reality show for your interest.

See the profile of the Sixteen Ultimate Love housemates below: 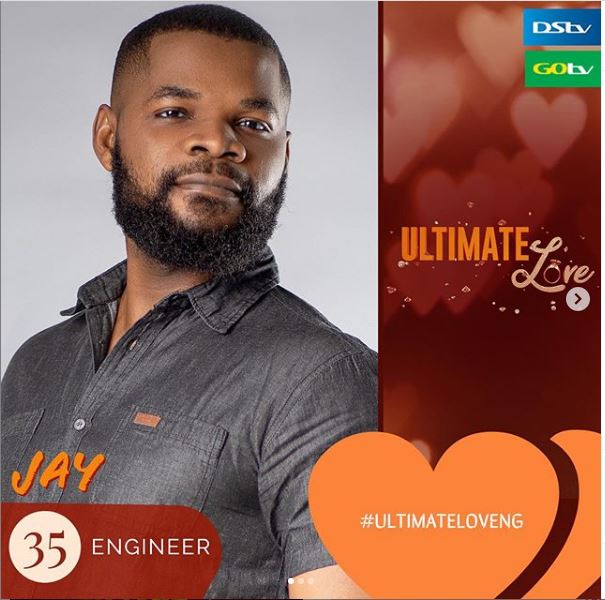 Jay is an Engineer by profession, 35-year-old from Ebonyi State.

Among the ‘Ultimate Love’ housemates, Jay from his age appears to be the oldest of the sixteen contestants of the first edition of the reality show.

Jay loves singing, he has an interest in meeting new people always, and the ‘Ultimate Love’ house is sure another platform for the engineer to enjoy his hubby.

According to the housemate, love is all about attraction, the basis for anything else that follows. Jay also has been quoted to say that he always dreamed of proposing in France, near the Eiffel Tower.

35-year-old Bolanle is a woman with a credible profile, beautiful and multi-talented.

She hails from Ondo State, she is a well-settled woman with media personality, from being a production manager to also a CEO of an industrial cleaning and fumigation company.

To Bolanle, she believes that there’s room for a little modernity and pragmatism when required.

The CEO is someone who has a negative feeling as regards ‘Public proposal’. However, is in the lookout for someone who is expressive and a solid communicator. Stating that “you can be 15 years into a marriage and still be growing and getting to know one another more deeply.” 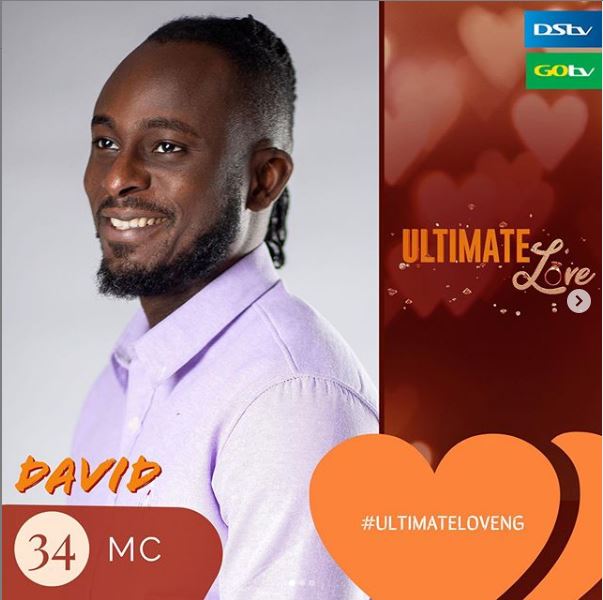 David Wilson is an entertainer, Master of Ceremony popularly referred to as MC.

The 34-year-old blunt man in is one of the ‘Ultimate Love’ Housemates who viewers should watch out for as regard vibes.

David hails from Bayelsa State, and though he is an MC, he has been confirmed not to be the anxious kind of person as regards relationships. He is an open-minded person who also believes in change. 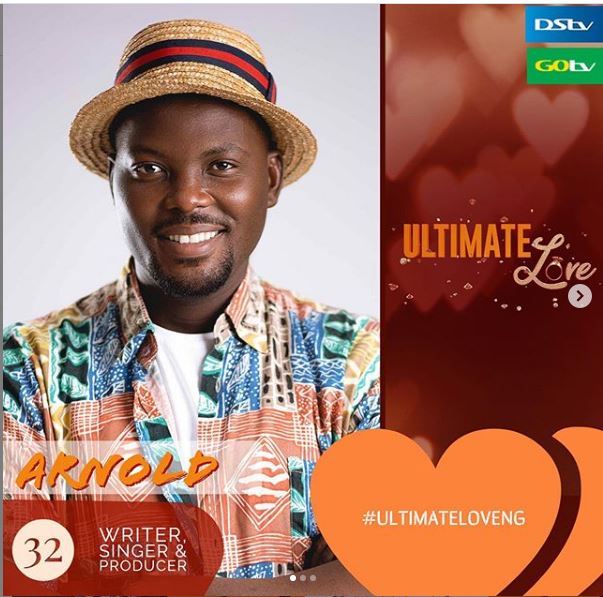 Loverboy Arnold is 32 year of age, a man who has much love Food.

Arnold is another young man in the Ultimate Love who viewers wait to see his kind of expression, hoping that he may turn out to be a lover boy in the house looking at his hubbies revealed as being able to write, sing and also as a producer.

Arnold had revealed that his longest relationship was with his high school sweetheart, which lasted four years. However, aside the angle people are looking at, Arnold is a lover of food and doesn’t play with his Egusi soup. Just like the popular saying that “The way to a man’s heart is through his stomach”. 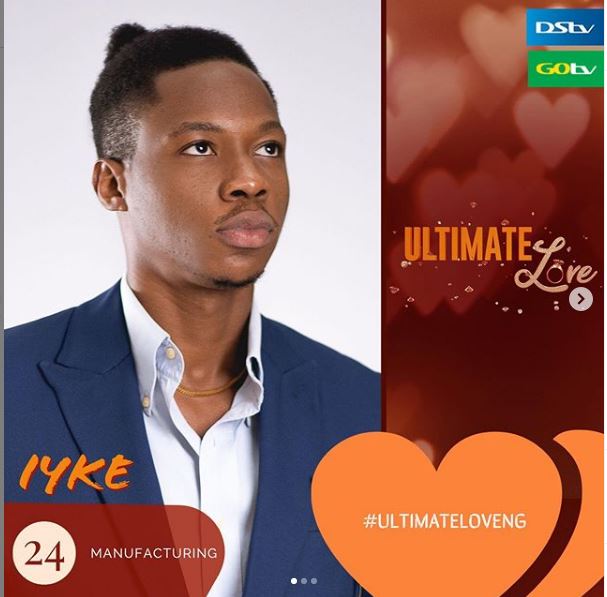 Iyke, the youngest in the house is believed to be a man who is ready to chase his dreams come what may.

The 24-year old Enugu State indigene is identified with manufacturing. Though Iyke’s line of production was not revealed, he is seen as a man who finds himself pleasure in dreaming big.

Iyke loves singing, outing and meeting new people. According to the young man, he believes that for a relationship to work, there must be a clear gender role. 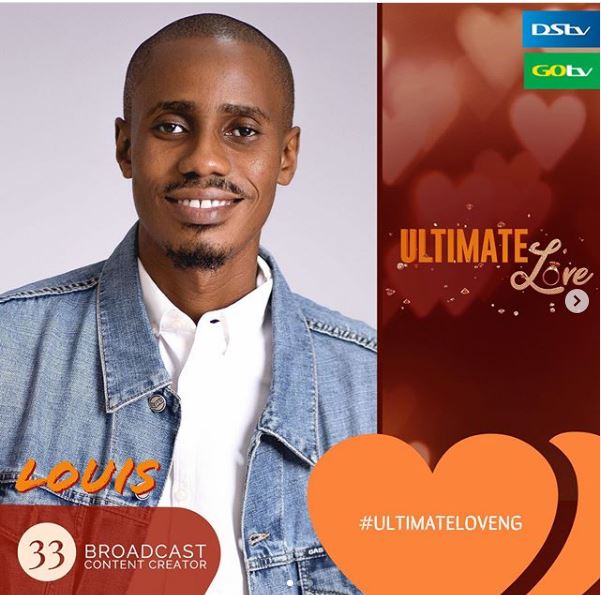 Louis is a full-blown man full of vibe, lover of tradition and someone who respect his culture.

Though Loius has a special believe and love for culture, he is also the modern-day kind of person who believes roles should be equally shared in a relationship.

To Louis, having a connection is very important, “a relationship can be judged in the beginning whether it’s for keeps or not,”  he noted.

Speaking about love, the 33-year old revealed that when his longest relationship of three came to an end, he had no regrets; nor did he harbour any feelings of resentment, because he thoroughly enjoyed his time in the relationship. 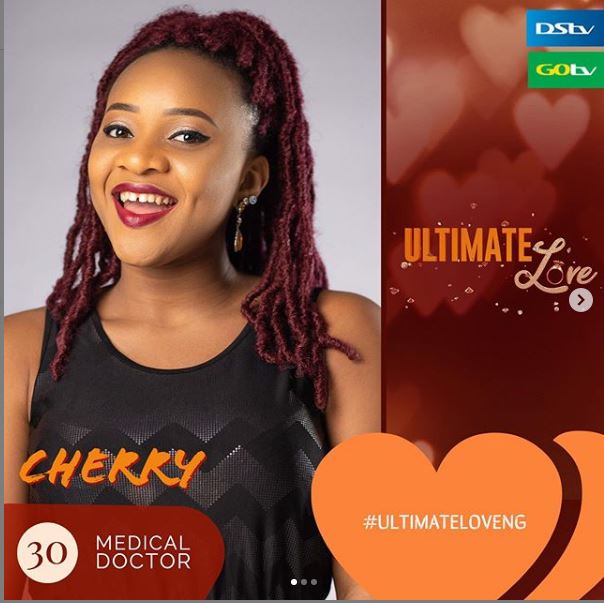 Imo State-born, Cherry, is a Medical Doctor by profession, a woman endowed with beautiful smiles.

Cherry is a sweet and soft-spoken Medical Practitioner who is keen to find a man who’ll love her for who she is.

In the first edition of ‘Ultimate Love’, Cherry should be one of those charming, outspoken characters to look out for. Aside from Cherry’s profession, she also has a crave for dancing. She is fun to be with and a career woman as well.

However, the 30-year-old smiling doctor reveals that she doesn’t believe in surface-level connections as she used to when she was younger. 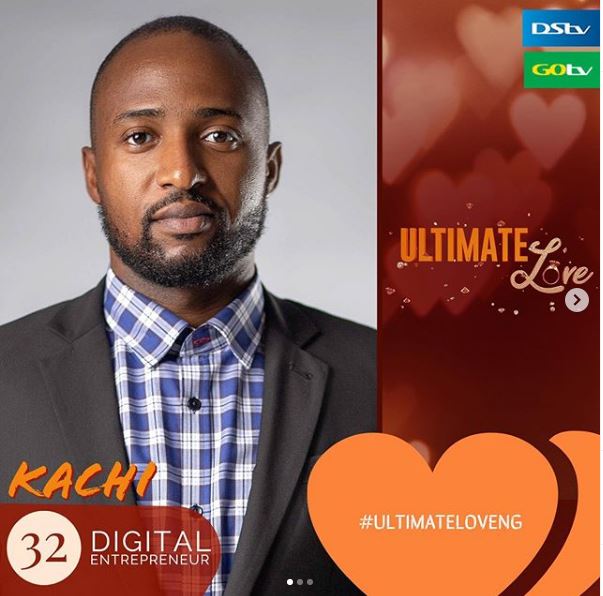 Kachi is another mild-mannered guy, a man of principle, calm, a seeming replica of Mike of the 2019 BBNaija reality show housemate.

The 32-year old Digital Entrepreneur hails from Imo State, he is a lover of his culture and tradition. The charming Kachi has believed and noted that a responsible man should always provide for his family, but has a liberal side to match – he is open to a partner having her own identity.

Speaking about relationship, Kachi stated that unlike some men, he doesn’t believe in love at first sight and prefers to find something deeper to win him over.

CHECK IT OUT:  FOOTBALL QUIZ!! Can You Guess The Name Of This Footballer By His Famous World Cup Hair?

Well, the house may get warm and interesting than expected with the person of Kachi as he disclosed that he will ‘need to take her by storm’, this he said when sharing how he’ll pop the question if he finds ’The One’. 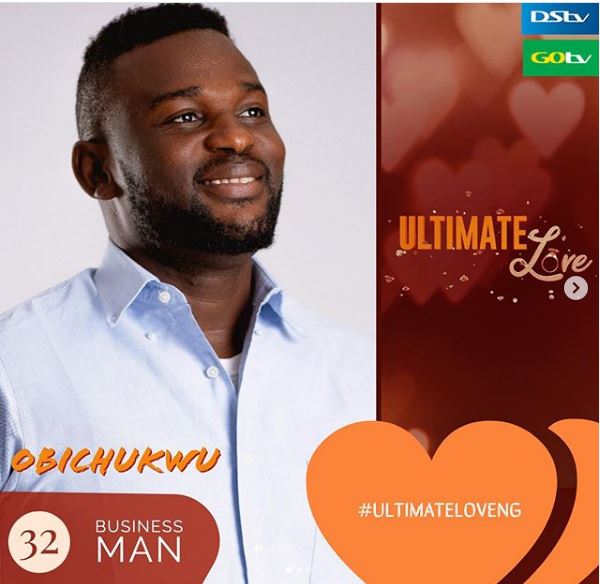 Speaking about loverboy, Obichukwu is obviously another loverboy who has stepped into the ‘Ultimate Love’ looking for someone whose beauty according to him must be more than skin deep.

The suave, dapper and staunchly down-to-earth, 32-year-old Imo State-born Business Man, Obichukwu, when asked about what he hopes for in a lover, he said: “A woman who gives me peace.”

According to him, “beauty means nothing if someone isn’t caring and compassionate.’ 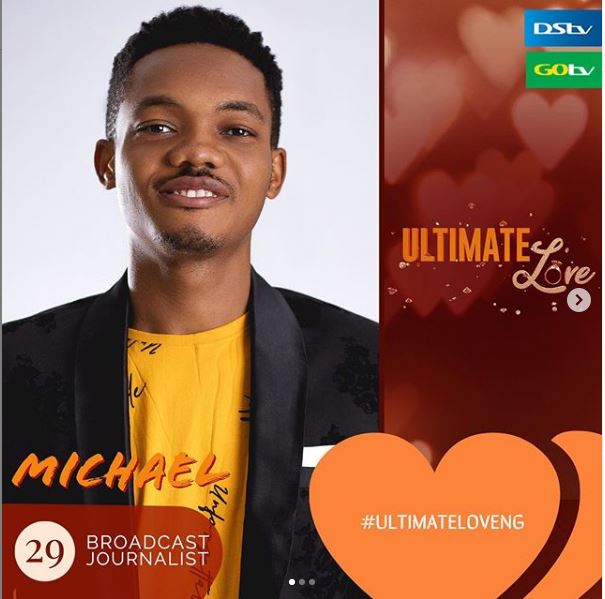 If you are looking for a preserved and calm person, well, Michael will not be a choice, the reason is that the 29-year old is a Broadcast Journalist, a Radio Anchor. So expect much.

However, Michael is has revealed that he will never compromise on love and believes that ultimate love is finding someone who can complement his life.

He is a lover of tradition, a selfless being, kind and patient in a relationship.

Revealing further, Michael noted that his passion for people in the past has burnt his fingers as he has been taken for granted. 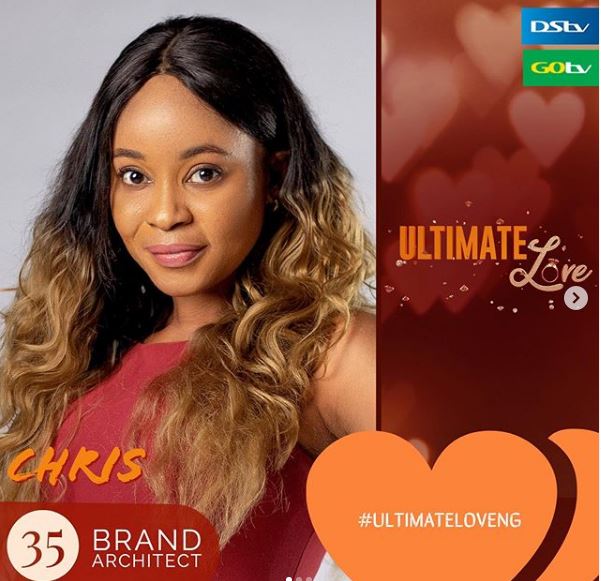 A fiercely traditional and conservative woman, Chris, is a Brand Architect.

The 35-year old Abia State indigene has been revealed as a sacrificial woman, full of passion for tradition.

Chris is the blunt type of woman who doesn’t shy away from calling it how she sees it.

The brand architect said that as long as she’s in love, she’s ready to say, “yes” to that life-long commitment.

Having the likes of Chris in the ‘Ultimate Love’ house could mean that there are dramas to come into displayed with the house full of love birds. 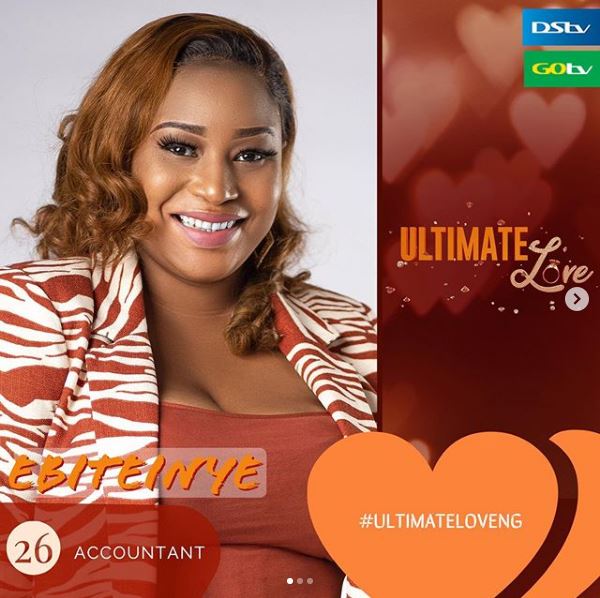 The Chubby looking but young Accountant, Ebiteinye, is a lady who has made her way into the ‘Ultimate Love’ house with a warming and charming smile, looking for attention and care.

The 26-year old lady in her narrative has believed that love can be found anywhere in an instant.

Ebiteinye noted that in her quest to find love, that her beliefs aren’t clouded and she is ready to take the role of being a supportive partner. 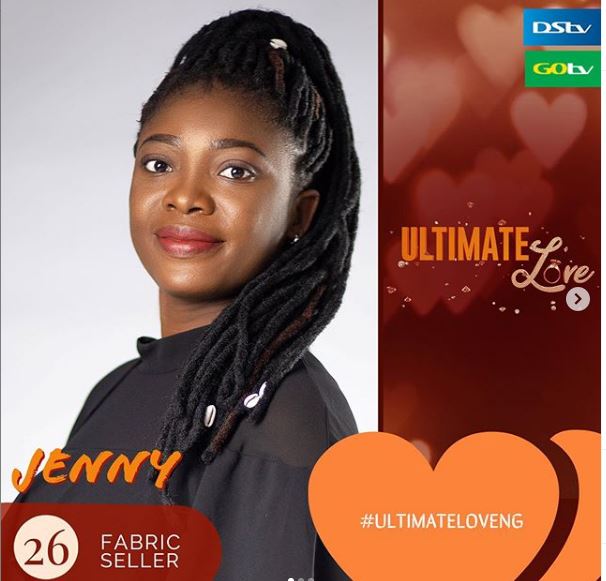 River State-born Jenny Koko is another businesswoman in the ‘Ultimate Love’, She is a young lady who respects Tradition and Culture.

The 26-year-old Fabric Seller, Jenny, disclosed in her narrative that she believes respect as the most paramount tool in any relationship, she is indeed a love bird as she declares that she is totally in support of love at first sight.

CHECK IT OUT:  Why APC Lost Zamfara, Bauchi, Imo, Oyo, Others To PDP – Buhari’s Aide, Ahmed

Speaking further on the relationship matter, Jenny reveals that she previously received a proposal from a man she loves but that her father declined after realising that the suitor was way too old for her in his opinion.

Well, Jenny Koko is here in the house and ‘Ultimate Love’ could be her chance to fall in love again. 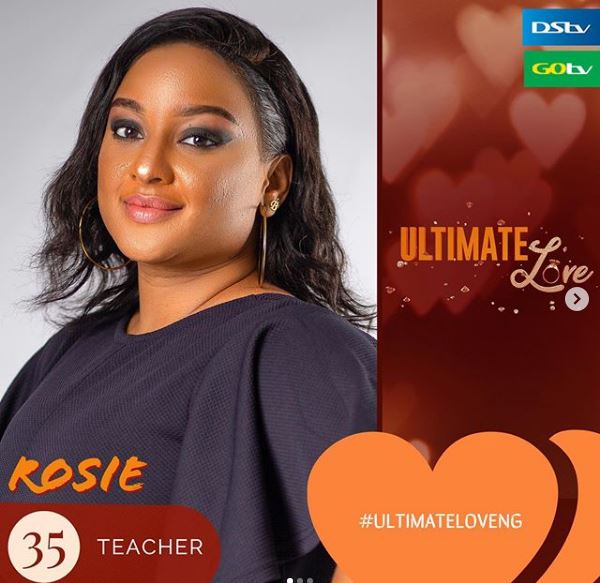 Rosie -Teachers are said to be Nation builders, of course, yes. Here comes a stunning lady who moulding the minds of young children has been her passion.

Well, out of the classroom is another life to enjoy, Rosie has taken a break from being in the Classroom to lookout for love as she joined the first edition of ‘Ultimate Love’ reality show.

The 35-year-old Ogun State-born has sparked reactions, and end love respect in the house as she narrates that her longest relationship spanned a respectable 12 year.

To Rosie, Love at first sight to her means more than the physical and is determined by whether she feels a meaningful connection with a person. 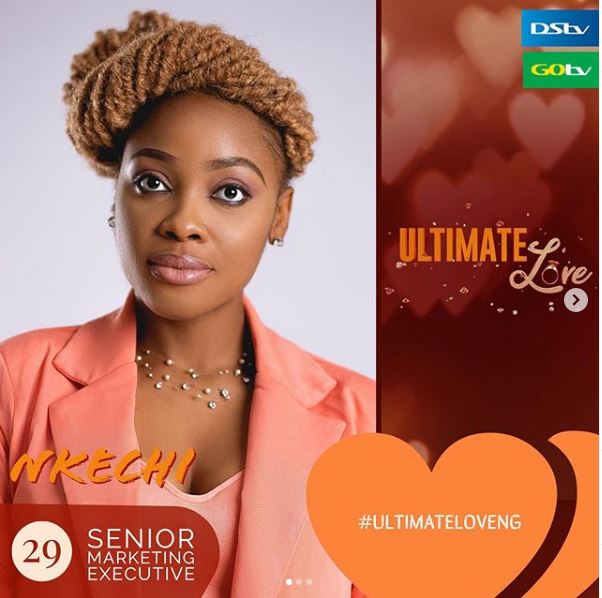 Nkechi who has found herself in the Love Pad is an assertive career woman who hails from Anambra State.

Having been in a long time failed relationship, Nkechi is now in search of a lifelong partner to who can give her all that she has needed.

The career woman is the type who derives joy receiving gifts and surprises. Do you want to show Nkechi love? Surprise her with a gift ranging from flowers, accessories and more. 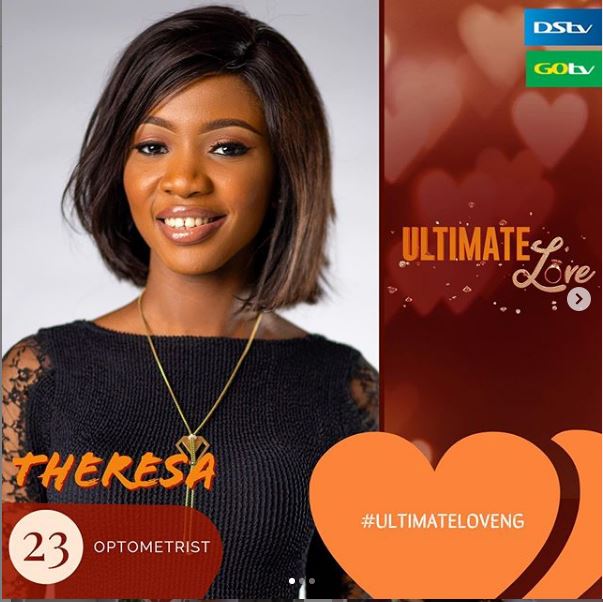 Theresa: A 23-year old Optometrist is a young charming woman who believes also in tradition.

Though in Theresa book of love, she believes in tradition but not at receiving ill-treatment from any man.

Beautiful Theresa is a private kinda person, she will only accept a proposal in the private according to her, but not in the open. Well, I hope this will not be broken in the ‘Ultimate Love’ house.

The young Optometrist reveals that the only time she craves attention is from her partner in a relationship and the more attention she receives, the more loved up she feels.

Keep your gaze on Naija News for more updates from the ‘Ultimate Love’ Nigeria, the first-ever edition.