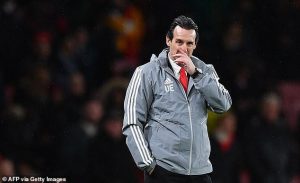 Former Arsenal manager Unai Emery has lambasted some of the Gunners players over their poor attitude during his time in charge of the North London outfit.

Naija News reports that Unai Emery and his crew ere sacked in November 2019 after a poor start to the 2019/2020 football season.

Speaking with France Football, Emery claimed some Arsenal players “asked for more than what they were giving back”.

He said: “We had Champions League qualification in our grasp and it went wrong in the end.

“But it was a good season and we had this notion of continuing to improve.”

The 48-year-old also stated that the exit of five Arsenal captains caused instability in the team.

“But we lost our four captains: [Laurent] Koscielny, [Petr] Cech, [Aaron] Ramsey and [Nacho] Monreal. They were personalities that we missed this season to stay on the right track,” he said.

“And some players did not have a good attitude and asked for more than what they were giving back.

“Taking all of that into account, we needed time to succeed with our transition to a new Arsenal which is what I wanted.”

CHECK IT OUT:  Woman Arrested For Pouring Hot Water On Defiled Teenage Housemaid