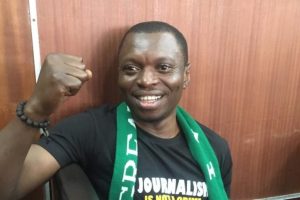 About twenty-four hours after Naija News reported that the Federal High Court, sitting in Calabar, has granted bail to the detained Nigerian journalist, Agba Jalingo, the reporter has been released today from the Calabar prison after meeting bail terms.

It could be recalled that Agba Jalingo who is the publisher with CrossRiverWatch was arrested on August 22, 2019, over a report alleging that the Governor of Cross River, Ben Ayade, diverted N500 million belonging to the state.

However, the Cross River State Governor, Benedict Bengioushuye Ayade, had earlier denied that he knows about the ordeal faced by the publisher.

Naija News understands that bail terms given by Justice Sule Shuaibu of the Federal High Court, Calabar, on Thursday for Agba Jalingo include, N10 million, a refundable deposit of N700,000 to court registry by sureties.

In another news, Naija News reported that members of the All Progressive Congress (APC) in Bayelsa State has taken to the street to lament bitterly on Supreme Court verdict which sacked governor-elect, David Lyon.

CHECK IT OUT:  Dasuki & Sowore’s Release Has Not Changed Opinion About Buhari’s Government – PDP