Blasting: The Demolition Of A Tower Ends Badly In Dallas - NaijaCover.Com
Skip to content 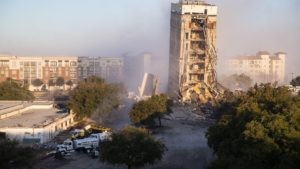 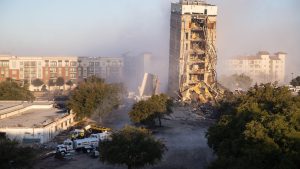 The demolition of a tower by implosion ended badly on Sunday in Dallas, Texas, when a part of the 11-storey structure resisted blasting.

An 11-storey building in Dallas has failed to abide by the laws of gravity. A controlled explosive demolition has left a portion of the building – subsequently nicknamed The Leaning Tower of Dallas – stubbornlyupright. pic.twitter.com/AM1qTBAmEM

“You could see the building collapsing, then this tower in the center remained standing. She is always there. Amazing!” Said a witness at the scene on KTVT, a local news channel.

According to demolition experts, it often happens that the heart of a building and the elevator shafts resist, but in this case, even a long-range excavator was unable to bring the tower down.

The teams on site are now thinking of using a crane and a demolition ball to shoot it down.

Meanwhile, it is not likely to collapse by itself, said the authorities.

The land is to be used for a new 27-acre development with several high-rise residences, offices, hotels, restaurants, a park, and entertainment.