I Was Shocked To Know That El-Rufa’i Has 83 Certificates From Havard – SAN - NaijaCover.Com
Skip to content 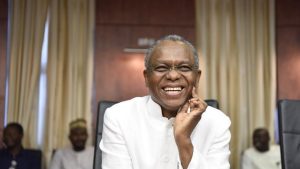 AbdulHakeem Mustapha SAN, lawyer to Nasir El-Rufai, Kaduna state Governor has in a statement noted that he was surprised to know that the governor has up to 83 certificates he obtained from Havard University.

According to Mustapha (SAN), who spoke during a tribute visit to Kaduna State Governor, by Nigerian dignitaries to celebrate his 60th birthday, said there was a particular time Governor El-Rufa’i’s was taken to court on account that he does not have a particular certificate. He speaks further that when they were about to appear before the court, El-Rufai dropped him from his car and handed to him a bunch of envelope.

He said; “When I opened the envelope, I discovered he has 83 certificates from Havard. And when I asked him how come? He said, A.U, when my peers were busy buying exotic cars, houses, and other luxurious things, this is what I was doing with my money.”

Meanwhile, earlier today Naija News had reported that protesters stormed the national secretariat of the All Progressives Congress (APC) in Abuja on Monday, demanding the resignation of Adams Oshiomhole as the National Chairman of the party.

CHECK IT OUT:  Congratulations To D’Banj As He Welcomes Baby Boy With Wife In The US

The protesters, bearing placards with various inscriptions, said Oshiomhole has plunged the party into many crises since he emerged as its National Chairman.