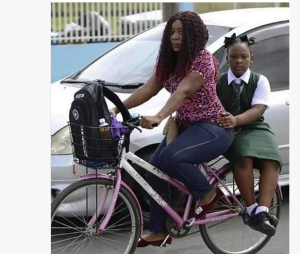 In what has been described as bravery, a woman was spotted in Lagos state amidst traffic on the street driving her daughter by herself on Bicycle.

One will wonder what kind of braveness such a woman has to have taken on such a big risk of driving a bicycle, not for exercise purposes but to carry her daughter on the same bicycle to her school.

This confirms that Nigerians can withstand any hardship, challenges that may be faced in the country. Despite how painful or difficult it may be, they will still survive it.

This dramatic event was coming a few weeks after Governor Babajide Sanwo-Olu gave an order which bans the operation of Gokada, Okada, and others in the State.

However, the governor later introduced a programme called FERRIES. A programme that was initiated to ease the heavy traffics by introducing the water transportation system to convey people from a destination to another.

On the other hand, the identity of the woman driving her daughter to school on a bicycle is yet to be known. But action has indeed called for the attention of Nigerians, who described her move as a loving and strong woman.

CHECK IT OUT:  DONE DEAL! Barcelona Complete Signing Of This Star Midfielder (PHOTO)