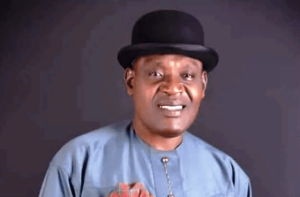 The sacked deputy governor of Bayelsa State, Senator Biobarakuma Degi-Eremienyo who was removed from office by a Supreme Court order has released fresh evidence to support his claims that his certificates are original.

Addressing a press conference in Abuja on Thursday, Degi-Eremienyo maintained that he didn’t present any fake or forged certificate or credential while seeking political office.

Naija News recalls Degi-Eremienyo was sacked as the Bayelsa State deputy governor alongside his principal, David Lyon after he was accused of presenting fake academic certificates to the Independent National Electoral Commission (INEC).

However, Senator Eremienyo has stated that he wasn’t given a fair hearing before the apex court pronounced him guilty and sacked him from office.

He added that he still has teachers and classmates who can testify to the validity of his certificates. He went ahead to name some of them during the press conference.

He also named some of his teachers as Wamarte and Mrs Humbly, Mr Frank etc.

He said, “Let me state that some of my primary school teachers are still alive: Chief Eredogiyo Watson, Chief Allen Obebe-Orukari and Susan Otiotio.”

“All my academic certificates are in the public domain. Whether they are genuine or forged are verifiable matters.”

“If these certificates exist and have not been altered in any manner, it would mean they are genuine. The next enquiry would then be if the names appearing thereon belong to me or belong to some other persons.

“If no other persons can be found who claim the names in the certificates then they are mine.

“Judges including justices of the Supreme Court are free to request law enforcement agencies to investigate persons who appear before them as to the commission or otherwise of crimes.

CHECK IT OUT:  Bike Accident: See The Girlfriend And Children DJ Arafat Left Behind (Photos)