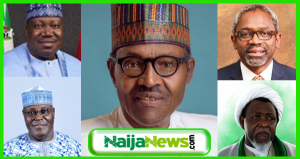 The governorship candidate of the Liberation Movement (LM) in the last election in Bayelsa State, Vijah Opuama, has approached the Governorship Election Petition Tribunal sitting in Abuja seeking the disqualification of Lawrence Ewrujakpor, the newly sworn-in Bayelsa Deputy Governor.

Naija News reports that in a petition he filed through Aluzu Ebikebuna, who is his lawyer, the LM governorship candidate further prayed the court to cancel the November 16, 2019 governorship election and order a fresh poll alleging that the election conducted by the Independent National Electoral Commission (INEC) failed to comply with the 1999 Constitution.

The Vice Presidential candidate of the opposition Peoples Democratic Party (PDP) in the 2019 Presidential election in Nigeria, Peter Obi, says it is “madness” for public officials to move with a convoy of about 20 cars or more.

Naija News reports that the former Vice Presidential candidate made this comment in his lecture at the convocation of Veritas University in Abuja, Nigeria’s capital on Saturday, February 22.

Hanan Buhari, the daughter of President Muhammadu Buhari, has denied allegations that she ordered the Department of State Services (DSS) to arrest a trader for using a phone line which she had used previously.

CHECK IT OUT:  “I Will Never Abandon Atiku” – Gbenga Daniel Opens Up

Naija News reports that Buhari’s daughter said she had not been aware of the matter until she learnt of it from the media adding that she had received complaints from relatives but she did not report the matter.

The Presidential candidate of the PDP in the 2019 election, Atiku Abubakar, has condemned the recent attack by Boko Haram in Garkida, Adamawa State.

In a post on his Twitter page, the former Vice President consoled those affected by the attack.

Naija News reports that the Bayelsa Deputy Governor made this known during a media briefing in Abuja, Nigeria’s capital through his counsel, Clement Kekemeke.

6. What Obasanjo Would Have Done To Boko Haram, ISWAP As Nigeria’s President – Fani-Kayode

A former Aviation Minister, Femi Fani-Kayode, says the Boko Haram menace ravaging Nigeria, would have been over if former President, Olusegun Obasanjo was still in power.

Naija News reports that the former minister who is a chieftain of the Peoples Democratic Party (PDP), Nigeria’s main opposition party, made this comment on the micro-blogging site, Twitter in reaction to the current insecurity in Nigeria.

Briton Tyson Fury grabbed the WBC heavyweight belt, defeating American Deontay Wilder by decree in the 7th round fourteen months after their memorable draw on Saturday at the MGM Grand in Las Vegas.

It is a sensation. But above all a consecration. Tyson Fury reigned in the ring against Deontay Wilder, unbeaten until then but completely helpless against the blows of the Briton.

8. I Live In Fear Everyday Over Insecurity, PDP’s Peter Obi Cries Out

The Vice Presidential candidate of the opposition Peoples Democratic Party (PDP) in the 2019 Presidential election in Nigeria, Peter Obi, says he lives in fear every day due to the current insecurity in Nigeria.

Naija News reports that the former Vice Presidential candidate made this comment in his lecture at the convocation of Veritas University in Abuja, Nigeria’s capital on Saturday, February 22, where he lamented the high cost of governance in the country.